When I was younger my family had a holiday house (a holiday shed, in reality) down the coast at Cape Schanck on the Mornington Peninsula. Between the ages of about 12 and 17, we spent every weekend at this property (which we called “the farm”), basically running around like wild, feral kids getting bruised, scraped, dirty and exhausted. It was awesome. Another great thing about the farm was that it had a private dirt track that led to a very deserted back-beach. That’s right bitches, private beach!! Did I forget to mention that I had an amazing childhood?

So every year we would spend most of the summer down at the farm, all piling into our decrepit, old Land Rover a couple of times a day to make the bumpy trek down to the beach where we’d spend hours fishing, swimming, crab-hunting, sand-duning, picnicking and lazing around. A rotating roster of relatives and family friends would join us, lending these summers a festive, carnival feel. I have so many vivid memories of these times. The time we found a huge echidna on the beach track, all rolled up into a ball – we tried to take him home with us, but he was having none of it. The time Uncle Paul was almost washed away to sea after a huge wave knocked him off some rocks. The time my Dad took a flying leap between two huge rocks, suspended in the air like Michael Jordan making a slam dunk.

Oh, and the time my friend Tina told me, as we lay on the beach perpetrating a tan (c’mon, it was the 80s), that I should probably start shaving my armpits and legs. I was 15 years old. I remember lifting up my arm in curiosity to examine the fluff growing there, wondering why on earth I’d have to shave it. I mean, I could barely even see it. I was bemused, and just laughed her off. It was only later, back at home, once I’d had time to think about it, that the shame set in. Shame that my body, in its natural state was apparently unacceptable. I was already a very self-conscious teenager but that was the first time someone had weighed in on my body hair. It wouldn’t be the last.

So I did what every young girl is supposed to do and started shaving. Right from the get-go I just hated shaving my legs. I hated the actual act of shaving, hated the bristly regrowth, hated how often I needed to do it for my legs to be acceptable (there’s that word again). So when I was seventeen I started getting my legs waxed. I haven’t put a razor to them since, and only need to get them done below the knee every 6-8 weeks to keep them respectable, sometimes going months between waxings. And even then the hair follicles have been so beleaguered and abused over the years that it’s all they can do to produce a few sparse, downy hairs.

My underarms are a different story. After that day at the beach, I spent the next thirty years of my life slavishly incorporating razor work into my shower routine, never letting my underarm hair get any longer than some slovenly stubble. And I never questioned why I was doing it. Not even once. In thirty years! Isn’t that crazy??? Everything else I do on auto-pilot has some kind of basis in hygiene. Shower, brush my teeth, wipe my ass, clip my nails. There’s a valid reason to do all of those things. But shaving the tuft of hair valiantly trying to grow in the space under my arms?? What was my reason for doing that??

Turns out that before around 1915 women didn’t care about their hairy armpits, because they were never on display. As soon as sleeveless dresses became a thing, so did underarm shaving. I wonder who decided that the hair underneath women’s arms was too “objectionable” to be shown in public. Oh yes. Objectionable. Check out this advertisement from a 1915 edition of Harper’s Bazaar:

And this British one from the early ‘30s.

It really gets my goat to think of the posse of gin-soaked ad-men at Dae Health Laboratories Ltd. sitting around a table in their double-breasted suits, smoking cigarettes and spit-balling ideas for how to get women to buy their product. Advertising’s greatest weapon is the consumer’s insecurity. Hair under women’s arms is no more disgusting than hair under men’s, but if women think it is, of course they’ll buy your depilatory cream. Of course they’ll buy your disposable razor. And they’ll keep buying it, over and over again until they die. It’s fucking brilliant marketing. And in the process, we’ve all been conditioned into thinking that armpit hair is gross. That it is objectionable.

My journey towards razor freedom started not as some kind of statement, but rather sheer laziness. Look, I’m nearly 46 years old. I’ve always been a low maintenance kind of girl anyway, stemming from my formative years as a tomboy, and from the fact that I am essentially a very slack human being. I don’t paint my nails. I don’t wear high heels. I don’t blow dry my hair, or even style it. And most of the time I don’t even wear any make-up. But after three decades of dutifully shaving my underarms, I started letting the regime slide a little. I just couldn’t be bothered. Instead of razoring every couple of days, I’d sometimes let two weeks go past without shaving (egads!!!!). Then, I’d notice the growth and do a quick shave. And the process would repeat. I wasn’t particularly fussed about the stubble, and David didn’t seem to care either (bless).

And then late last year, seemingly out of nowhere, I realised it had been a couple of months since I’d shaved and that I’d cultivated some cute little fuzz under my arms. I loved it. It felt a little rebellious to be sporting what Gwyneth Paltrow once dubbed, “a seventies vibe” under my arms. But I certainly wasn’t growing it deliberately, and I wasn’t trying to achieve some kind of edginess, or anything as interesting as that. It was simply the result of deep-seated sloth, and that is all. The day before our Australian holiday earlier this year I stood underneath the shower and argued with myself about whether or not I should shave it. And in the end, because I hadn’t been growing it for any particular reason, I succumbed and scraped the razor over my skin leaving me smooth and hairless once again.

But I do remember being a little bit sad about it.

Once the holiday was over, I stopped shaving again and allowed nature to do her thing. Once more the primary motive was laziness, but this time there was also a definite pinch of disobedience involved. To shave or not to shave had somehow become a big deal, not because the act of shaving itself was a big deal, but because the choice had been taken out of the equation. For the first time, I questioned why I was doing this odd thing. Was it for hygiene (would I smell bad if I grew the hair out)? Was it cosmetic (was hair under my arms actually ugly, or was I just brain-washed into thinking it was)? Would people judge me and consider me less attractive or less feminine? Maybe they would. But if so, whose problem was that? I decided it was no longer going to be mine. 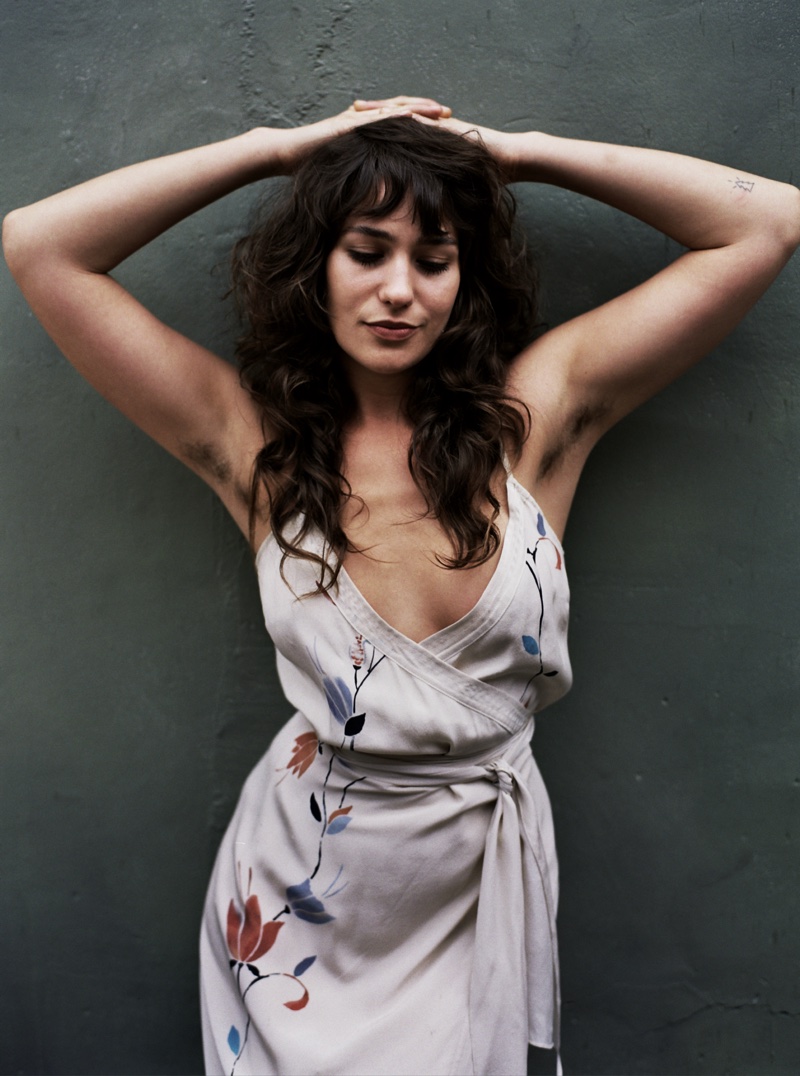 I defy anyone who says that Lola Kirke is less attractive because of her underarm hair.

In May we had a couple of friends from work over for dinner. Once more I found myself in the shower, in a terse stand-off with the razor, debating if I should shave under my arms or not. Would not shaving be some silly, pointless act of defiance? Against what? Would shaving be an act of surrender? And if so, surrender to what? To whom? And seriously, why was this such a big deal????

That’s when I decided to just leave it. Fuck it. I didn’t care. And for once I didn’t care if other people had a problem with it either. Here’s the thing with me. In some ways I’m still that self-conscious teenager, always worrying about what people think of me. And in other ways, I’m fiercely individualistic and don’t give a flying fuck what other people think of me (complex, much?). Essentially, I’m a good girl. But I have a streak of bad girl in me too. Just a tiny little streak, but it’s there and it’s real. It’s why the hair on my head has been every colour of the rainbow. It’s why I’ve had multiple body piercings, including in my tongue. It’s why the pizza boy once copped a beautiful eyeful when I was dared by friends to answer the door naked. These little rebellions don’t amount to much, but it’s part of who I am to kick back against the establishment, just a wee bit.

Unfortunately, because of where I live, I’ve had to tame that part of myself. When giving my husband a peck on the lips in public is something that could land me in jail, I just can’t afford to act out. But this small thing, allowing my “gross” underarm hair to grow out, is one thing that I can do to assert my individuality after years of it being suffocated. And even though not shaving my underarms has (somehow) become the difficult choice, I’m not actually trying to make any kind of statement. I’m simply exercising my right to choose what to do with my body, in a way that has absolutely no impact on anybody else. I might wake up tomorrow morning and decide to shave it all off again. I might decide to dye it fluorescent yellow. I might decide to throw some glitter on it and call it Betty. But whatever I do, it’s my choice and for the first time in a long time I’m proud of myself for not conforming, for doing what I want to do, regardless of what other people might think. And you can bet I’ll be waving my arms in the air about it.

Even though I haven’t shaved for about five months the hair under my arms is even sparser than this – I do wonder if it was thicker if I’d still have the gumption to grow it.  Food for thought, eh?

Check out this amazing photo series by Ben Hopper which I discovered while writing this ejo. I like to think that the point isn’t that you can be beautiful despite having underarm hair, but that it just doesn’t matter one way or the other.