Well, this is my twelfth ejo for the year, which means I have achieved my goal of writing an ejo a month.  Taking my cue from a lovely friend who set herself nine goals in 2009, I specified 11 things that I wanted to accomplish in 2011 and this marks one of them as completed!  I am so pleased with how motivated I’ve been to finish my goals that I will definitely continue it next year and beyond (though I imagine that 45 goals in 2045 won’t be nearly as much fun as 12 for 2012, or 13 for 2013)!

I’m lucky enough to live and work in a country that provides me with a great deal of fodder and I’m never at a loss about what to write about next.  This month I have chosen to write in a little more detail about the men who have created the amazing city David and I live in.  I’m not talking about the Sheikhs who run it, and I’m not talking about the architects who designed it.  I refer to the hundreds of thousands of Indian, Pakistani and Bangladeshi men who, day by day, brick by metaphorical brick, have built this city from a handful of low-rise buildings scattered across the desert thirty years ago, to the skyscraper filled metropolis of today.  I am talking about the construction workers and labourers.

Construction workers being herded onto their bus

Before I get into that though, I’ll briefly touch on what at first may seem like a completely unrelated topic.  Me.

I am not ashamed to admit that I have suffered depression exactly twice in my life.  I don’t have a predilection for it, unless you count my melancholic teenage years when I would lock myself in my room for hours on end, writing awful poetry and listening to George Michael’s “Careless Whisper” on repeat (c’mon, it was the eighties!).

The first time I experienced real depression was when my Dad became ill and died of lung cancer.  It knocked me sideways.  Forcefully.  I sought medical help and, slowly, I climbed out of the depths of despair that I’d fallen into and back into a normal life.

The second time was when David and I moved to Dubai.  You might remember that, initially, I wasn’t offered an ATC job as promised, and this gave me a great deal of professional anxiety.  Would I work as an ATC again?  Who the hell was I, if I wasn’t an Air Traffic Controller?  Also, even though I loved living in Dubai, I found it a cold and indifferent place.  I didn’t make many friends and started feeling that there was something wrong with me.  My self-confidence crumbled.  I hadn’t realised how important the support network of all my friends and family back home was.  And without that support, I floundered.  I forgot who I was.  In addition to all this, I found the obscenely large divide between the ‘haves’ and ‘have-nots’ of Dubai a constant slap in the face – this alone would be enough to distress even the hardiest of optimists.

There were two things that helped me get out of my Dubai depression.  The first is a woman called Zimmy Khan, a clinical hypnotist and theta healer, who in just a few sessions stripped away all the fear and doubt and negativity I’d accumulated, leaving behind the person I’d been when we first moved here (someone I’d actually feared was gone forever – that’s what depression can do to you).  Even though I am perfectly OK now I still see her every couple of months to make sure that I stay that way.  I can honestly say that she totally changed my life for the better and I would recommend her to anyone going through any kind of crisis, big or small.

The other thing that helped lift me out of my doldrums was the labourers that work outside our apartment building (Ejo #3).  How could they possibly help, you wonder?  Well, they didn’t exactly come up to the apartment and make me cups of tea while we chatted about what was getting me down.  No, they helped me in another way.  By smiling.  In 48ºC heat, sweltering in their yellow, full-body jumpsuits, big heavy boots and protective helmets, whenever they spotted my car they would cheerfully smile, salute, jump up and down, and wave.  Our neighbours, who we’ve lived next door to for three years, can’t even muster up the courtesy to respond when we say hello (let alone smile when they see us).  Literally, they ignore us when we say hello!  But these labourers, whose lives are crappier than our neighbours’ by a factor of about a billion, act as if we’re Bollywood superstars whenever they see us.

What have we done to deserve such fanfare?  Not much.  From time to time during summer, when we were out shopping for groceries, we would pick up a few extra bottles of fruit juice and hand them out to the guys when we got home.  That’s it.  In fact, I don’t think it’s the juice that they appreciated so much as the fact that we noticed them and treated them like regular people.  To us, unlike many others, they are not just part of the infrastructure.  To us, these guys are human beings who simply have the misfortune of being born into a life so crappy that the best option for them is to leave their home and come to work here.  And to put into perspective how bad that life must be, the average monthly wage of a labourer in Dubai is about 800dhs (~ AUD215).  To earn that, they must work outdoors for 12-14 hours a day, 6 days a week, 52 weeks a year – for three years.  And then they reach their use-by date and get sent home.

Because they get paid so little they are forced to live in the labour camps outside the city.  They are housed a dozen men to a room.  There’s no air-conditioning or heating (and yes, it does actually get cold at night in winter) and sometimes there’s not even running water.  The conditions are abysmal.  Even worse than this, these men are deemed sub-human by almost everyone.  It’s absolutely disgusting and shameful.  And whilst it’s the construction companies that mistreat and underpay them, I personally blame the government for allowing it to happen.  It’s not as if they’re illegal workers.  The government allows them into the country on work visas.  But once they’re here, they aren’t allowed to form unions, they aren’t offered any wage protection or even minimum conditions of service.

And it’s the rulers of Dubai who benefit from these men the most.  It’s the shiny, glittering buildings that attract the tourists – and tourism, not oil, is where the government makes most of its money.  The men that build these amazing skyscrapers and towers almost never see the inside of them once they’re completed.  Referred to as “bachelors”, they are considered the lowest class of citizens in the UAE.  What pisses me off the most is that without them, Dubai would still be a dull, desert village that virtually no-one had heard of.  There would be no Palm Jumeirah.  There would be no Burj Khalifa.  The city shows no gratitude, no respect and no acknowledgement of what they’ve done or what they continue to do.  So when David and I occasionally get them a drink to quench their thirst on a hot day, they are thankful not only for the cold drink but also for the gratitude and respect that we show them.  They are thankful for the mere fact that we acknowledge their existence.

These guys (and their cheerful smiles) forced me to put my own angst into perspective.  I have an (air-conditioned) roof over my head and I live a very comfortable life.  They live like animals, get paid a pittance (most of which they send back home to their families), and for them a treat is going to the movies twice a year.  And these guys SMILE at ME!  Their predicament strikes very close to my heart.  My father was a labourer so it’s very easy for me to put him (or even myself) in their shoes.  And to be honest, I don’t know if I would have the same strength and fortitude that they do.  So, sometimes, when they smile at me it almost makes me want to cry.

I’ve thought long and hard about where these smiles could possibly spring from.  The simple explanation is that the human spirit is incredibly strong.  Even under the harshest of circumstances, it will not break.  My problems are trivial in comparison to what these guys face every day.  Putting that into perspective certainly helped me conquer my own demons.  But feeling better as a result of comparing my life to someone’s less fortunate isn’t really enough.  I realised that if I could do something to actually help them, it would make me feel better still.  I didn’t want to ignore the issue, as so many others here do (because it’s so easy to do).  I didn’t want to be complicit with the problem, or contribute to it by turning a blind eye.

Recently, I got in touch with a woman called Roshni Raimalwala who runs an organisation called Karama Kanteen.   Roshni accepts donations of food, clothing and other goods from schools, companies and individuals, and she organises volunteers to distribute these to the labourers at the camps – often providing between 200-500 labourers a week with a hot meal.  This month she has distributed Christmas hampers to 1500 workers.  In November I bought food to provide 200 labourers with a meal.  I can’t tell you how good that made me feel.  Amazing, actually.  One of my twelve goals for 2012 will be to do this on a regular basis. 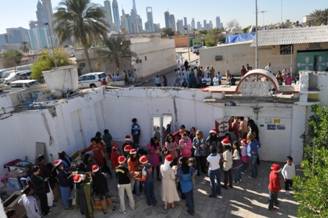 With Zimmy’s help, and by learning from my worker friends that I can be happy regardless of what the world throws at me, I am now mindfully grateful for what I have.  And I worry far less about what I don’t have.  I am hoping that, during this holiday season, you too are grateful for everything that you have.  In fact, I’m hoping that you are so grateful you’ll also consider donating to this cause.  Even just $5 will buy a couple of hot meals.  I’m not growing a moustache, running a race or even wearing a red nose to raise money.  I’m just asking, and hoping that out of the very goodness of your hearts (and that’s all it would be as it’s not tax deductible), you’ll want to do something, give something, to help make a fellow human being’s day just a little bit better.  A little less bleak.  After all Christmas is a time for giving.  Of course it feels good to give to your loved ones.  What I’ve found is that it feels even better to give to those truly in need.  If you’re interested, please let me know and we can sort out a way to transfer the money.  I’ll make sure every cent/fil goes towards food and clothing for the workers.

To finish, I’d like you to meet Najimasker.  He’s a 34 year old Pakistani who’s been in Dubai for two years.  He’s a little guy with an enormous heart and even though we have nothing in common (and probably wouldn’t have anything to talk about, even if we were to sit down for  cup of tea) I consider him my friend.  He brightens up my day, and it is my sincere hope that I do the same for him.  That’s what friendship is about, right? 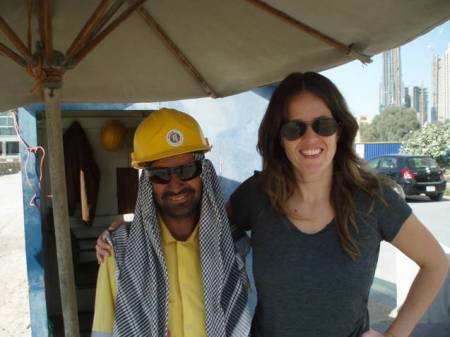