Yesterday was a rather lazy day. Late lunch, a lovely Cremant Rosè on a terrace overlooking a glorious park, and then a little while spent lolling in aforementioned park. Then, later in the evening, we went out for a fancy schmancy dinner at a restaurant called Lorenz Adlon.

The trivia freaks amongst you might remember the name Adlon (which is also the name of the hotel which runs the restaurant) as the place where a younger, unwiser Michael Jackson dangled his (ridiculously named) baby son, Blankey (or Blanket, or Whatever) over the balcony. Ooooh, how scandalous!

Lorenz Adlon is one of only a couple of Berlin restaurants awarded two Michelin stars (see, I told you it was fancy schmancy). We had a GREAT night, ate LOTS of amazing food and drank a ridiculous amount of good wine.

We had a table with the best view of the Brandenburg Gate!

I know, I know. But it’s just so damn delicious. Particularly when paired with an AMAZING sparkling Moscato d’Asti.

Salmon (along with a whole bunch of other stuff that I can’t remember off the top of my head but which was just divine).

The delightful marriage of pork and scallop, in a subtle curry emulsion. Mmmmmm!! 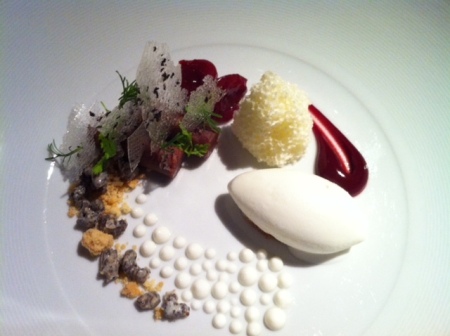