My Greek heritage has never sat very easily with me. I am, of course, 100% Greek having been born to two Greek parents. There is no denying my “Greekness”. Plus, with a name like Chrysoula Stathopoulos… well, good luck trying to deny it. I was, however, born and raised in Australia, and I feel Australian.

Growing up Greek-Australian wasn’t always easy though. My first language was, naturally, Greek. My parents did make an effort to teach me some English before I went to school, and (not to blow my own horn) I picked it up pretty quickly. So I wasn’t completely illiterate when I turned up on my first day. But I always felt a little like the odd person out. It all seemed slightly foreign to me, and perhaps that’s how I seemed to them too. My Grade Two teacher actually sent me to the Principal’s office on the first day of class because she assumed I was making fun of her when I told her my full name. How’s that for a slap to your sense of identity’s face? I stuck it out until I was 13 before abbreviating my first name to Chryss, and for many years I was embarrassed of how “weird” my name was. But I’ve grown to love it. My name is mine. It’s who I am. It identifies me as my parent’s daughter. As a young girl, I used to fantasise that when I grew up and got married I could finally change my name to that of my husband’s. I’d daydream of marrying some guy called Smith, or Evans, or Jones, and I even practised my (much shorter) signatures. Little did I know that when I would get married, at the ripe old age of 35, I’d lived with the moniker Chryss Stathopoulos for so long that the thought of being called something else no longer appealed to me.

So, the tug o’ war between being Greek and being Australian began when I started school. It didn’t help that my parents enrolled me in “Greek School”. These classes, held on Saturday mornings, were designed to teach us the language, history and culture which were potentially being diluted by our assimilation into Australian society. My experience of it was not rosy. My teachers were sadistic and abusive. When I came home from these dreaded classes one Saturday afternoon with an angry purple welt on my cheek where Mr. Karafiliakis had pinched it – hard – on discovering that I hadn’t done my homework, my parents relented and withdrew me from the school. Victory! Or so it felt at the time.

I have been to Greece a total of seven times. And each time, I’ve reflected that perhaps I should have stuck it out at Greek School after all. My grasp of the language is not awesome. I can have simple conversations, but I struggle to read a magazine. And writing? Forget about it. I have a third grader’s ability where that is concerned. Not to mention, my accent is abysmal.

Language isn’t the only reason I’ve always been slightly disassociated from being Greek. I certainly don’t feel like I belong there when I visit. I’m just another tourist. Having lived my whole life in Australia, that is the country that has seeped into me. That is where I’m from, and where I belong (even after four years abroad, and no return date in sight). So even though I’ve been to Greece to visit my relatives a few times, and even though I do speak the language, albeit pretty badly, it always feels like a strange and foreign land. David feels more at home there than I do. He has more of an affinity for it than someone who is only one generation removed. Which strikes me as weird. So I tried to figure out why that should be, and what I came up with was the discord between my childhood (and the standard of living that I grew up with) compared with my parent’s experiences growing up. The divide is great.

When I was a kid we weren’t really well off. Even so, I had privileges that my parents had worked hard for and which, I guess, I took for granted. I had clean clothes, shoes that fit, three meals a day and a roof over my head. My parents both grew up with a lot less. My father didn’t own a pair of shoes until he was in his mid-teens. My mother had to quit school at the age of 11, to tend the family’s herd of sheep. Hearing stories like this when I was young, it’s no wonder I had mixed feelings about my parent’s motherland. What kind of a hole was this ‘Greece” place? It sounded bloody awful!

To change the topic briefly, I’ve inherited some pretty good DNA. Whilst both my grandfathers died in their mid-70s, both my grandmothers are alive and well at 97. Having met my grandmothers only a handful of times though, I haven’t really had the chance to get to know them very well. But I do know that they are two completely different people. My Dad’s mother, Yiayia Chrysoula (after whom I am named), is a large-bosomed, warm-hearted, gregarious woman who created a scandal by marrying for love, and she didn’t give a damn what anyone thought about it. She had six children with my grandfather and, even though times were tough, she lavished them all with love and affection. I don’t think it’s any big secret that my father was her favourite though. And he adored her in return.

In stark contrast, my Mum’s relationship with her own mother has always been strained. Yiayia Maria (after whom both my Mum, and my middle sister, are named) had a difficult life, in an arranged marriage, bereft of affection. My grandmother came from a world of never-ending hardship where, perhaps, showing love to your children was a luxury she couldn’t afford. Maybe she’d never experienced love herself? My mother grew up believing that she’d been born to fill the role of family shepherdess. She wasn’t born from love. She was born from necessity. To do a job. And she did that job, until she was 16 years old and her parents tried to marry her off to a man three times her age. And when she balked at that, they sent her to Australia, all by herself. How’s that for motherly love? 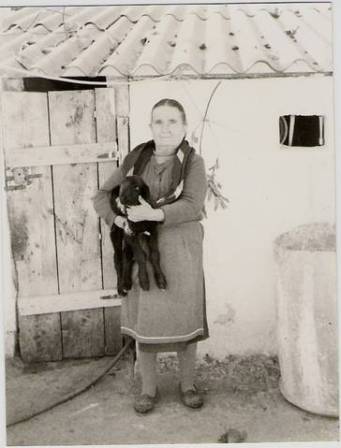 Old photo of my grandmother Maria looking very stern – whilst holding a sheep!

Hearing about my Mum’s difficult childhood when I was growing up, I couldn’t help but develop a grudge against my Yiayia Maria, far away as she was at the time. How could she treat my mother like that?? How could she be so cold and unloving? These resentful feelings were reinforced every time I visited Greece and spent time with her, and I never developed the same kind of bond that I did with Yiayia Chrysoula.

This year marked my seventh pilgrimage to Greece. It was timely, as Yiayia Maria had recently suffered a serious health scare, and I wanted to go and see her while I had the chance. She is my family, and even though we aren’t close, she is still my grandmother. Yiayia Maria has lived in the same white-washed, mud-brick house for the last 60 years. It’s not actually even a house, just a one-room building that holds all her worldly possessions – a bed, a table, some religious icons and family photos. It is Spartan, to say the least, and not the kind of place grandchildren want to be. As a young girl I found it kind of uncomfortable and uninviting. Now, I just find it forlorn and kind of sad. It is the house my mother grew up in.

Bedroom window – with a photo of my grandfather on the wall.

The chair my Yiayia Maria sits in most days, whiling the time away under the old olive tree.

So, even though the house was the same, some things were different this time. Yiayia had been taken off the cornucopia of medication she’d been popping for years, and seemed healthier for it. She’d cut off her waist length braid into a more manageable bob. And she was no longer wearing the scratchy black clothes and headscarf – her uniform since my grandfather died more than twenty years ago. She seemed more… I don’t know, grandmotherly. Vulnerable. Tender. Even so, when my Mum asked me to help bathe Yiayia Maria one blistering, hot afternoon, I balked. Naked, old lady?? No thank you. Ew! But my Mum needed the help, so I agreed. I figured I could just squint my eyes and avoid seeing anything too gross. (Yes, I am an awful person.)

Typical whitewashed walls and painted shutters. Looks nice but the reality is that it hides a difficult life.

Clothesline used to hang up a sheet to cover my Yiayia Maria’s modesty from the ever present gaze of curious neighbours.

My grandmother’s house doesn’t have a proper bathroom. There is a toilet in an outhouse, but bathing is done the old fashioned way – from a basin filled with water. We put a large bucket of water out in the sun an hour before, for it to warm up. And then we hung sheets up on the clothesline to create a makeshift, outdoor shower curtain. We helped her pull her simple cotton dress over her head and suddenly there she was. My grandmother standing naked before me. And you know what? She looked pretty damn good. Instead of being grossed out, I was impressed. Yes, she was wrinkly, and a little saggy. But she was ninety, freaking, seven years old. Her body was magnificent. Beautiful. This body had walked her through almost a century of hardship and adversity, and it was still going strong.

That hot, summer afternoon I not only experienced the dawning awareness that my grandmother was just another person, made of flesh and blood (and the origin of my own flesh and blood, at that). I also encountered the wonderment of how miraculous the human body really is. As my Mum shampooed and conditioned, lathered and scrubbed, I gently poured the warm water over my tiny Yiayia Maria to rinse away the suds. The moment threatened to overwhelm me. My mother had never felt loved by this frail, naked woman. She had never been told that she was loved as a child. She’d never even been hugged. And not only did she manage to raise her own three children in an environment FILLED with love, she also had enough left over to keep on giving to Yiayia. Washing away the residue of the day from my grandmothers body with love, care and respect, she also cleansed the remnants of pain and hurt and despair. It was a beautiful moment for me, not least because it may be one of my final memories of Yiayia. And while I didn’t walk away from the experience feeling any more Greek than before, for the first time in my life I did feel a little closer to my roots. 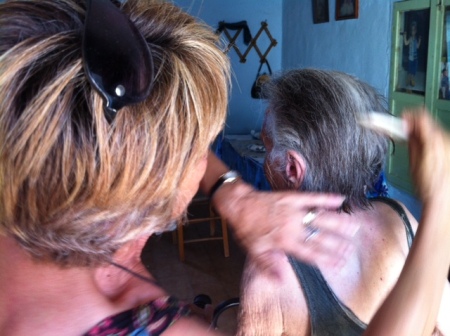 My Mum gently combing Yiayia Maria’s hair after her bath.