I have two buckets lists. A reality bucket list – with just one item on it. And a fantasy bucket list with lots of items on it. The difference between these two lists, if you haven’t been able to glean it from their descriptions, is that one of them is achievable through my own action and will. Here is a copy of my current reality bucket list:

The other is basically wishful thinking. Here is my fantasy bucket list:

As you can see, these are things that aren’t really very probable at all.  They’re not impossible.  Just not very likely.  They are things that I have a very low-level, background, desire to happen – with the complete understanding that they probably won’t.

So, something happened recently that got me rather excited.  I got a message out of the blue from someone that David and I had met when we first moved to Dubai (way back when), a great guy called Love (yes, that’s his real name).  It had been a few years since we’d caught up, though I’d maintained a friendship with him on social media (yay Facebook!!!).  Here’s the message:

“Hey, u been to an Indian wedding before?  I’d like to invite you & David to my sister’s wedding in December.”

Imagine my delight!  I literally jumped for joy.  Fantasy bucket list, bitches!!!!!!  Naturally, the first thing I did was start researching what to wear.  Love had said that we could just wear regular western style clothes to each of the events, but that’s not my style.  If there’s an excuse for dress ups, I’m going to get dressed up (hell, sometimes I like to do it for absolutely no reason at all).  And I’m lucky enough to be married to a man that doesn’t mind getting into it either.  Damn, we were going to an Indian wedding!!!  Of course we were getting dressed up.

The parts of the celebration that we’d been invited to were the three main events, held over three days.  The first event was the sangeet, a pre-wedding function where the bride’s and groom’s respective posse’s have the chance to mingle and get to know each other.  It’s basically a monster party full of music, choreographed dancing, tonnes of food and loads of drinking.  The second event was the actual ceremony itself, a more subdued affair, but no less colourful or joyful.  And the third day was the wedding reception, the bride and groom’s first event as husband and wife (which is basically just an excuse to throw another big party – did I mention that Indians like to party?!).

So, my hours of meticulous research led me to the conclusion that I would be suitably attired if I chose to wear a ghagra (which consists of a long, embroidered skirt, a cropped blouse and a dupatta (or shawl) draped over the shoulder) to the sangeet party, a sari (which you’re probably more familiar with) to the ceremony and western clothing to the reception.  Perfect!  Now all I had to do was get myself a ghagra and a sari.  Lucky for me, we live in a city where more than 40% of the inhabitants are Indian so there is no shortage of places to shop.  It’s just a matter of knowing where to go.  Too bad for me, I had no idea.  But, I do know a lovely Indian woman at work called Dayini.  So I asked her if she could recommend somewhere to buy these exotic threads and to my delighted surprise, she offered to take me clothes shopping herself.  How wonderful!!!

We ended up at Karama Centre, a small mall in old Dubai which houses a number of Indian clothing and jewellery stores.  When we walked into the Silky Calicut shop my eyes widened at all the beautiful fabrics lining the walls, creating a jewelled rainbow of colours.  Crimson, purple, aqua, sapphire, chartreuse, gold, magenta.  So much beading, so much embroidery, so many sequins.  How on earth was I going to choose something?  My friend asked the assistant to show us a selection of ghagra fabrics.  He fanned out a golden lace skirt with green accents, and bright red fabric for the blouse.  I fell in love with it instantly.  But I couldn’t possibly choose the first thing I saw, so we insisted he show us a few more options.  Wouldn’t you know it, none of them dazzled me like that first golden skirt, so I tried it on (with a sample gold blouse for sizing).

Check out that shit-eating grin.

The tailor came out to measure me up and, with Dayini’s help, asked my preferences for buttons, zips, edging, sleeve length, blouse length etc.  I was so grateful that Dayini was there to translate and help me make these decisions, or it would have been a lot more difficult to convey what I wanted – or to even know what I wanted at all.  I mean, I know what I like, but I’m no expert on Indian attire.  So, thank you Dayini, for all your input and recommendations.

With the ghagra sorted we returned to the shelves to select a fabric for the sari.  Once again, I chose the first one I saw (hey, when you know, you know).  It was a beautiful magenta and gold number that I just couldn’t say no to.  Now, for those of you who aren’t aware, wrapping a sari is a nightmare of an ordeal.  There are several YouTube video tutorials about how to do it but it’s difficult as hell AND there’s always the chance that it will come undone at the slightest provocation.  So I’m more than happy to admit that I chose to have my fabric sewn into a “cheat” version of a sari.  Basically the tailor stitches the yards of fabric into a skirt which buttons up (thus preventing an unfortunate wardrobe malfunction), leaving the rest to be draped around in the traditional style.  Unless you’re looking very closely, I think it’s pretty hard to tell the difference.

A week later, Dayini and I went back to the store so I could try on the finished product.  I was thrilled.  Looking in the store mirror, I felt like something halfway between an exotic princess and a character at a themed costume party.  I am quite conservative in my day to day dress.  I wear a uniform of jeans and t-shirts, in predominantly dark colours (Melbourne girl alert!!!), which might be why I like the opportunity to exhibit a little fashion flair when the occasion calls for it.  But wearing those sparkling, colourful clothes, even with just the shop assistants as my audience, I was transformed into a different person.  I felt regal and glamorous.  I felt amazing.

But hey, I hear you ask, what about David?  I was sorted, but now we had to find something for him to wear.  Male guests to Indian weddings have their choice of kurta, a posh sherwani or a suit.  The store that had made up my clothes didn’t do male attire but they recommended a few shops in the area that did.  Unfortunately, while we did find a very reasonably priced kurta in one of those stores, it was one size too small so we had to keep looking. 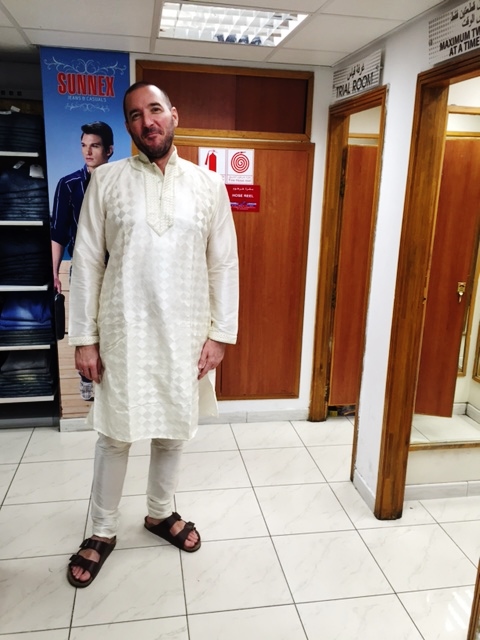 Just a little narrow around the shoulders and tight in the calves.

We bade Dayini farewell and went strolling through old town Dubai.  After a well-earned pit-stop at an Arabian teahouse, we set out on foot again and serendipitously happened upon a clothing store that looked like it might have what we needed.  We explained to the assistant what we were looking for and he pulled out a kurta that not only perfectly matched my outfits and fit David like a glove, but which made him look like he was born a Raja.  Why are men so much easier to buy clothes for??!!!  Too easy.  We were ready for the wedding.

Tune in next month to hear all about the actual event itself.  I promise you, it’ll be fun.