Being my favourite place in the world, and one of my most frequently visited, I’m sure it’s no surprise to you that I’ve often found myself drunk* in this beautiful, vibrant, culturally stimulating, inviting and fun city. I guess the reason I haven’t written about it before in this series is that I have kind of wanted to keep these hidden gems private. But, in the spirit of sharing and an effort at magnanimity, behold as I lay bare just a few of our favourite corners of Amsterdam (surely you don’t expect me to give up ALL my secrets) places to get tipsy and places best experienced tipsy.

For the last couple of years it’s become a tradition that the first meal we have after arriving in Amsterdam is at The Seafood Bar, located right next to Vondelpark. I can’t remember why or how that happened, but now I simply can’t imagine eating anywhere else on that first day. It’s become one of those things that gets me excited about an upcoming trip. 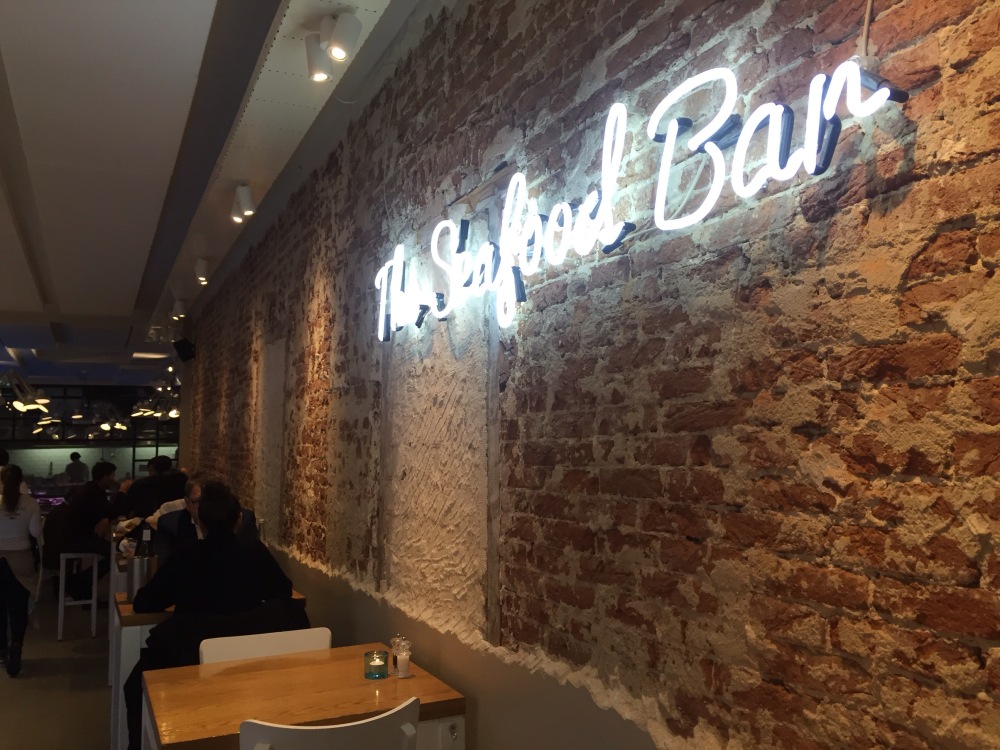 To me, The Seafood Bar = Amsterdam.

Bright and lively, it’s a place where you can get some fresh seafood cooked perfectly and served to you by attractive young waitstaff with a smile and a quip. For some reason we always get the same thing. A plate of 16 mixed oysters, fish and chips and a bottle of Ruinart champagne. Any time we’ve tried to stray from that formula we usually spend about 45 minutes trying to pick something else from the menu and then end up ordering the same thing anyway. And it’s not for lack of enticing options. Everything sounds (and looks) delicious. Maybe one of you could try something else from the menu and tell me about it. 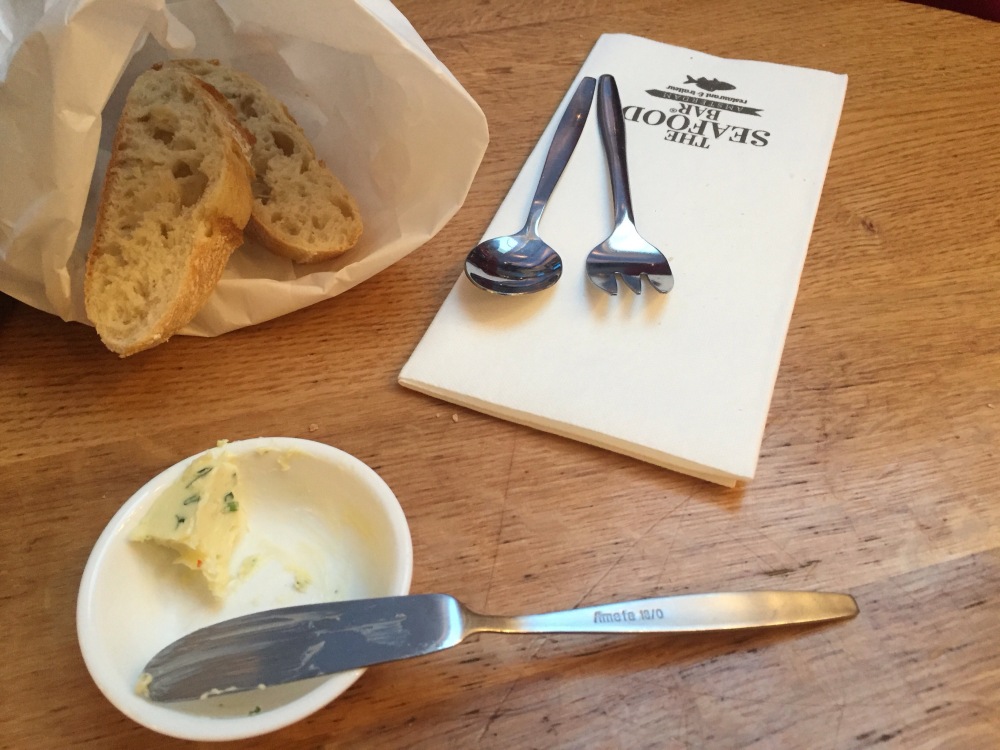 I don’t eat much bread but I eat this bread. You would too.

Invariably, the best oysters are the local Tara’s. Fucking delicious. 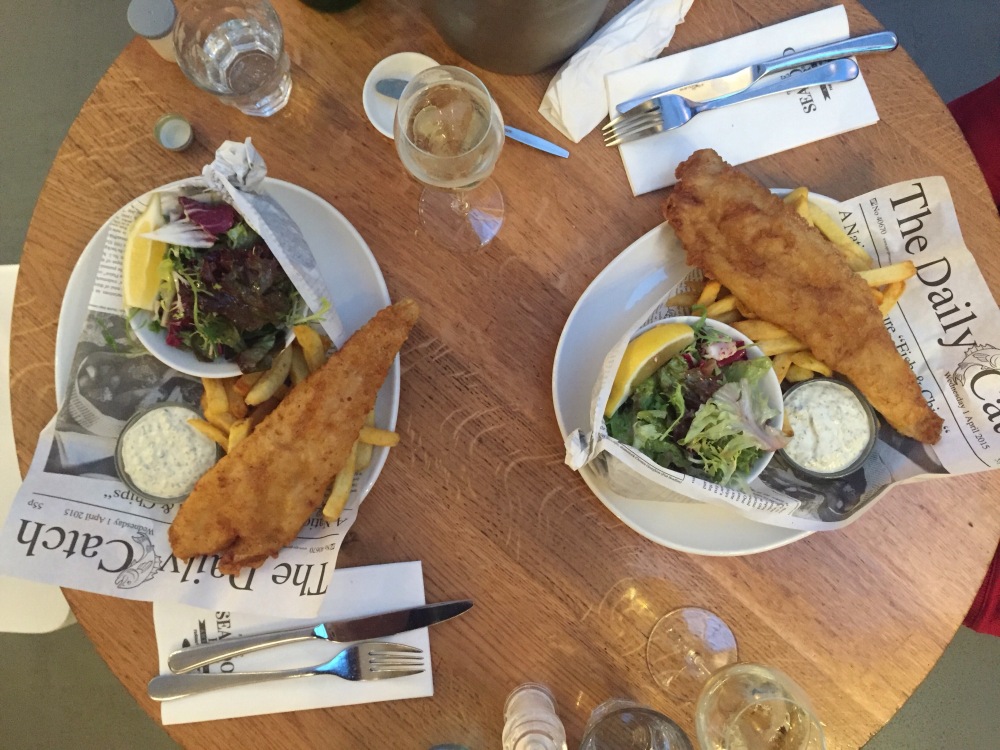 Light and crisp batter is the signature. Delicious tartar a bonus.

One of our favourite places to get a morning-after fry-up is P. King. It’s a pretty ordinary looking café that serves a pretty damn good version of Dutch brekky – ham and fried eggs smothered in melted cheese. We usually get the heart-starter version with added bacon because we’re on holiday and because we’re little piggies. We also like to get a morning after beer (because: see reasons already mentioned). 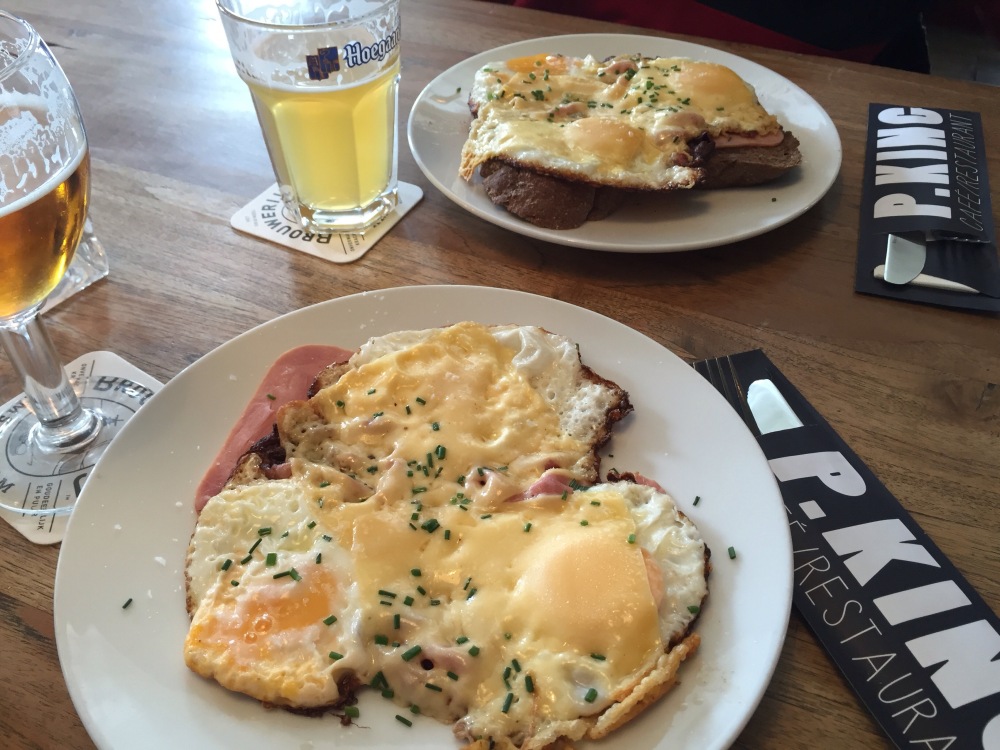 My concession to healthy eating? No bread.

I always like to inject a little culture into our drunken trips and on this occasion we visited the edgy Foam Gallery to check out an exhibition on the artist Francesca Woodman who killed herself at the tender young age of 22. Photographs weren’t allowed but I managed to sneak a couple in for you. 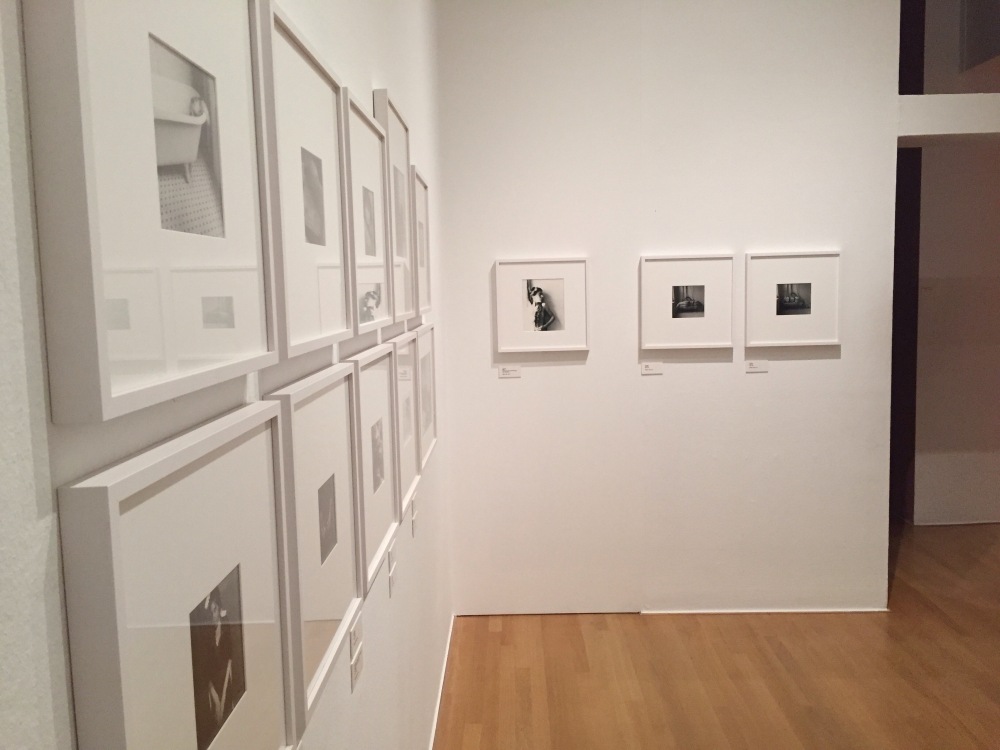 She was doing nude self-portraits from the age of thirteen. 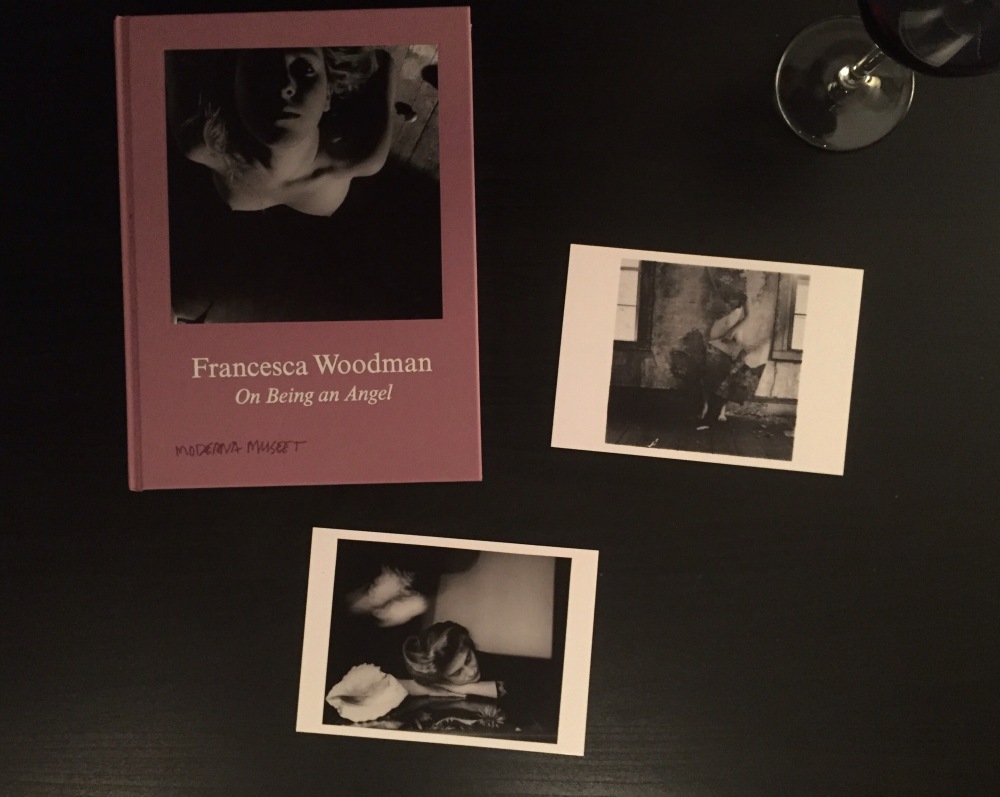 An exhibition so captivating I wanted to take it home with me..

I have a theory that any city worth living in has a a foodmarket, a collection of eateries and drinkeries all under one roof where you can spend an entire afternoon grazing and nibbling and sipping and slurping your way through all the stores before stumbling home for a well earned nap. Amsterdam’s version is located just outside the four canal belt but well worth the “trek”. Just like the city itself it is small but perfectly formed and worth exploring every nook and cranny. Below are some of the highlights. 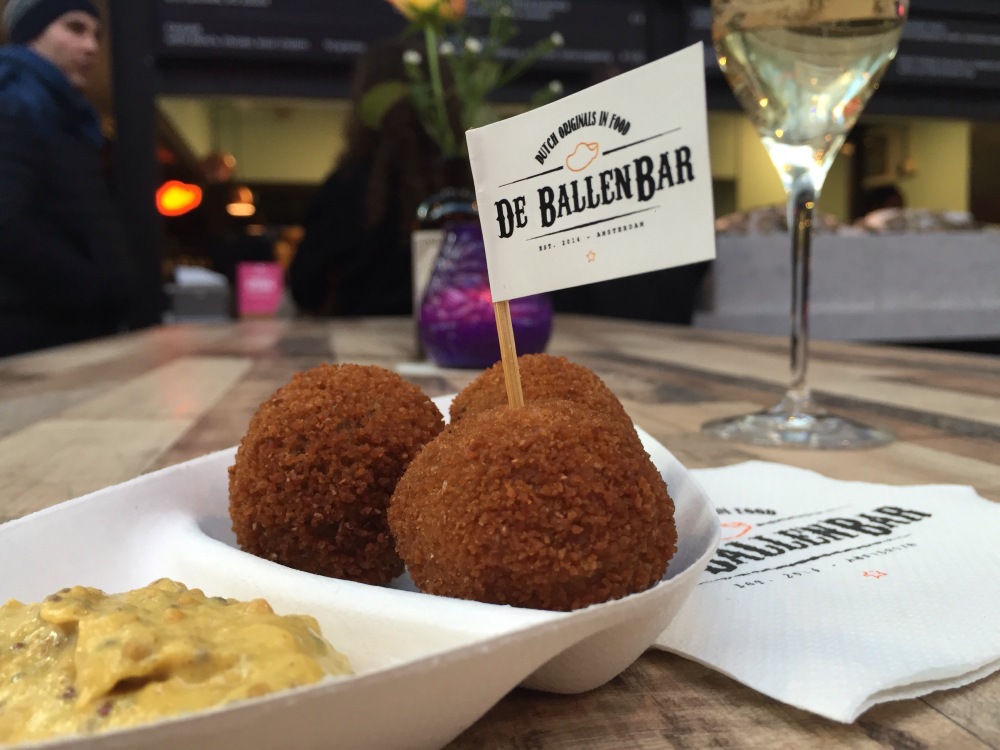 Bitterballen are a Dutch staple. 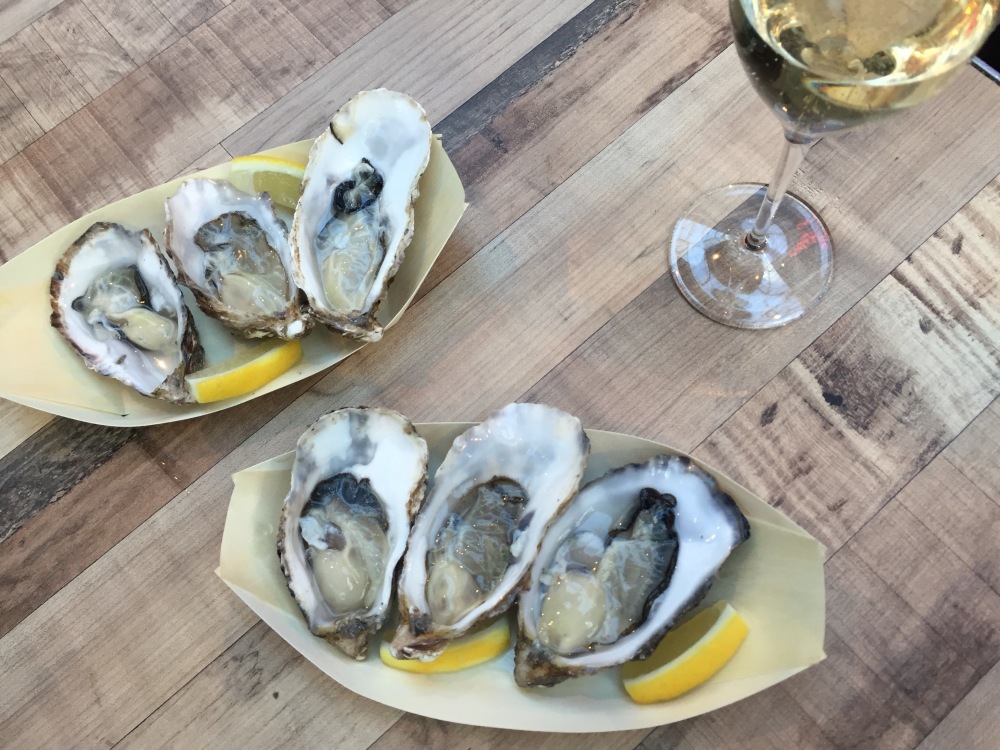 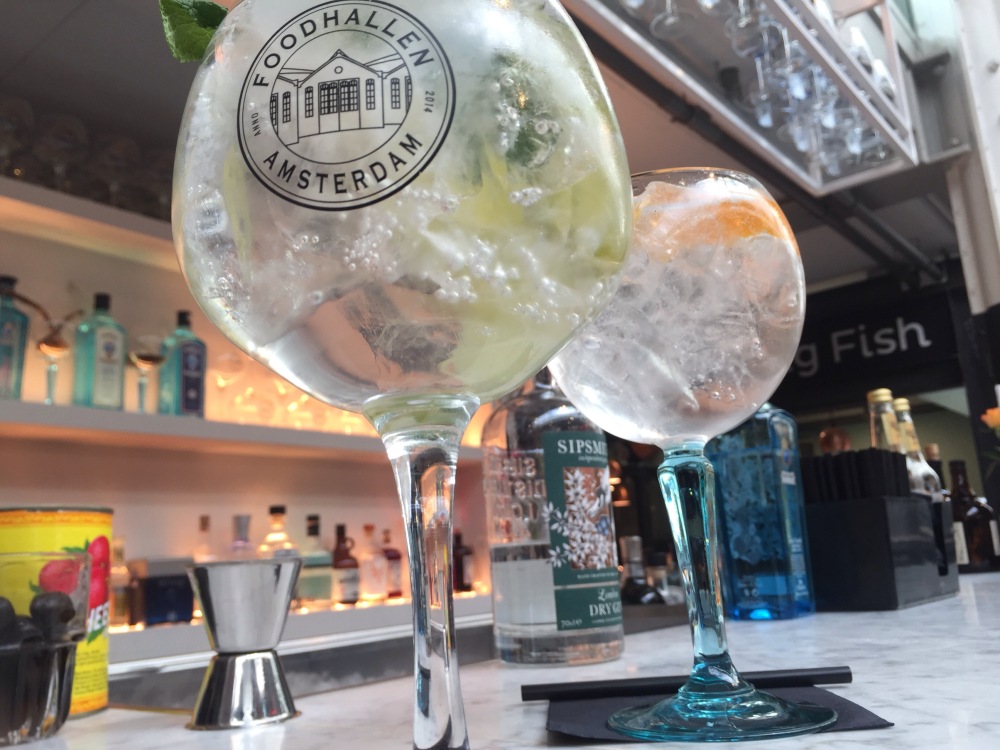 Spanish style gintonics. Each gin is served with different aromatics. 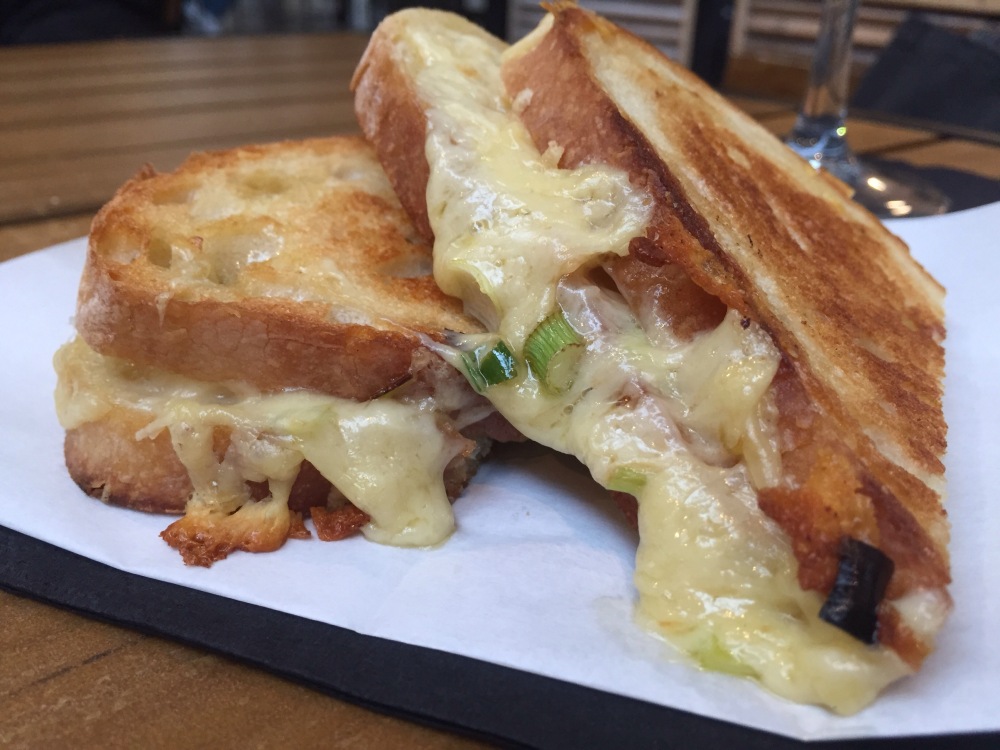 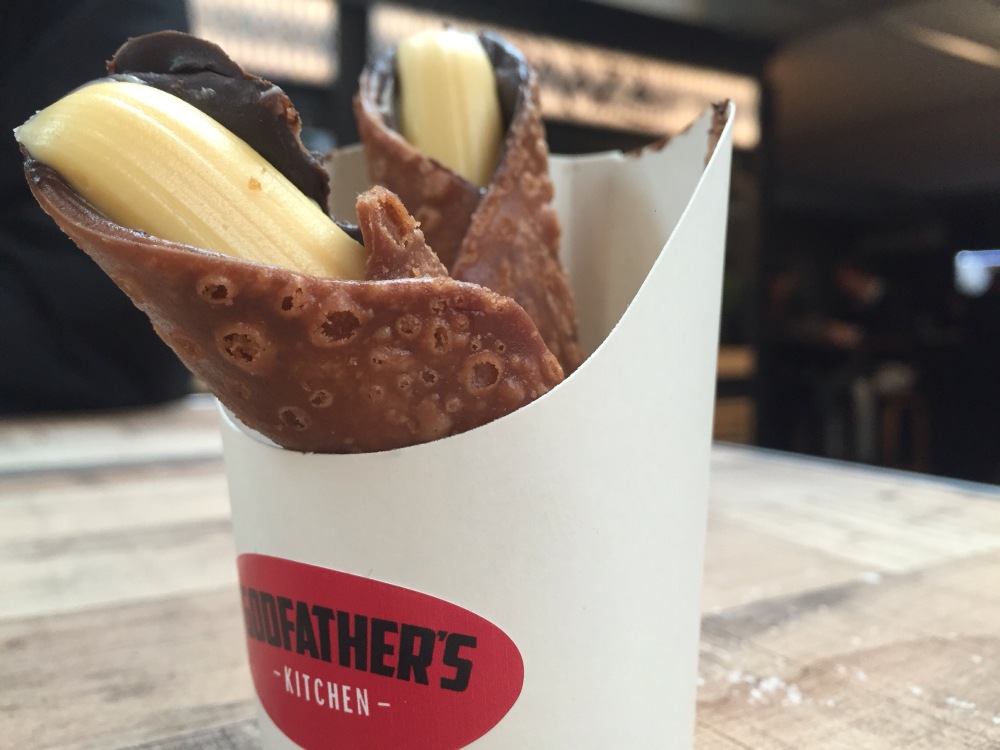 So unnecessary and yet so necessary. Zabaglione canoli.

Best coffee in Amsterdam. That is all. 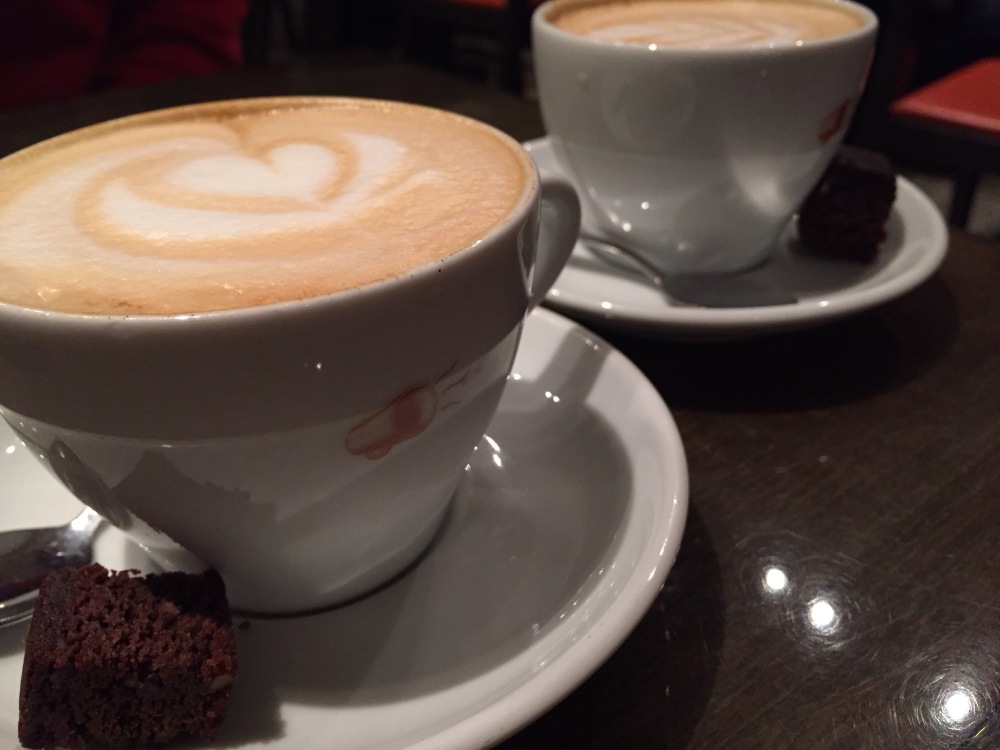 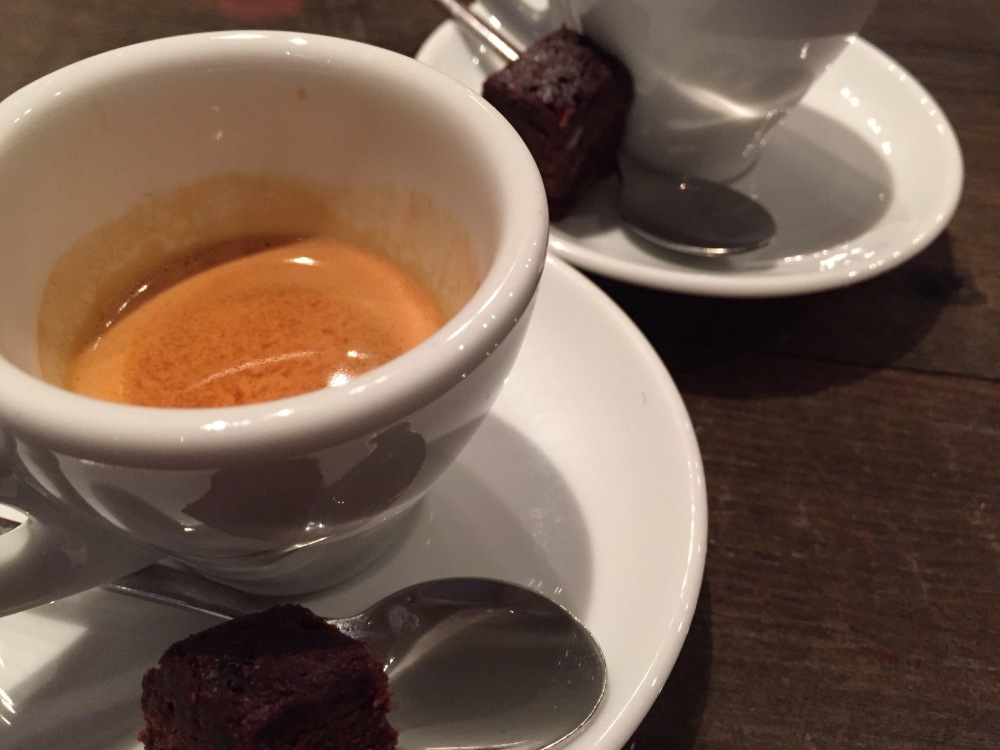 Best espresso I’ve ever had. 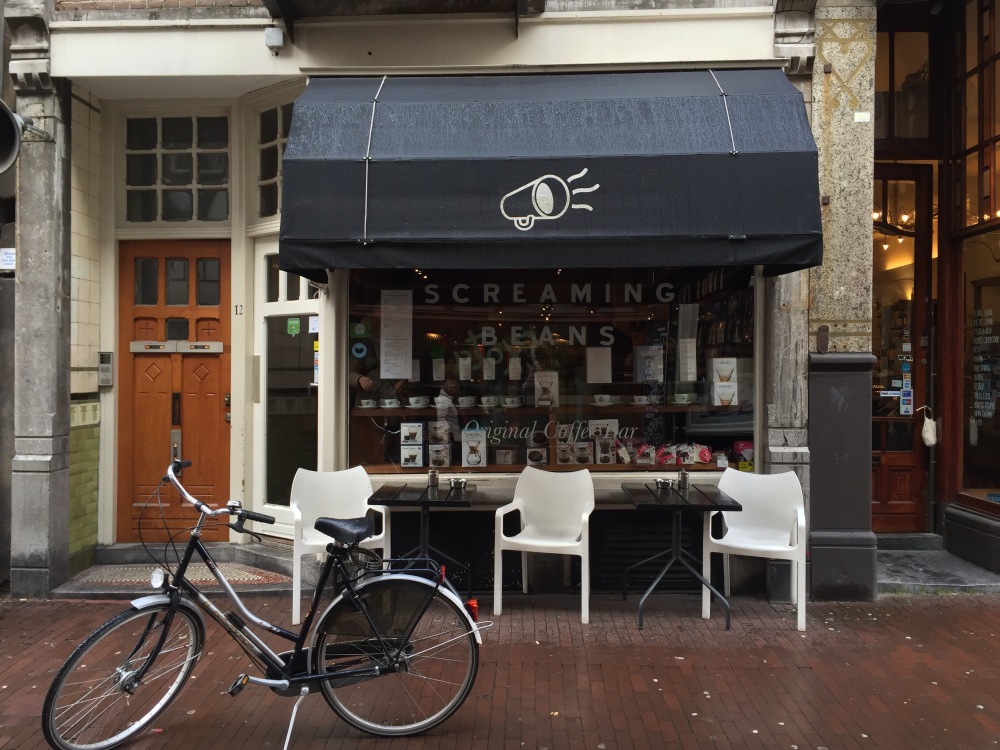 Cosy café to bunker down in when you get hit by a sudden hailstorm.

It’s all in the name here. You WILL have to wait for a table (there’s only seating for about ten) but it’s well worth it. When you’re seated in the little alcove, bumping shoulders with strangers as you reach for your last slice of pizza and take a sip of your Tuscan red, you’ll feel like you’ve somehow been transported to Italy. Delizioso. 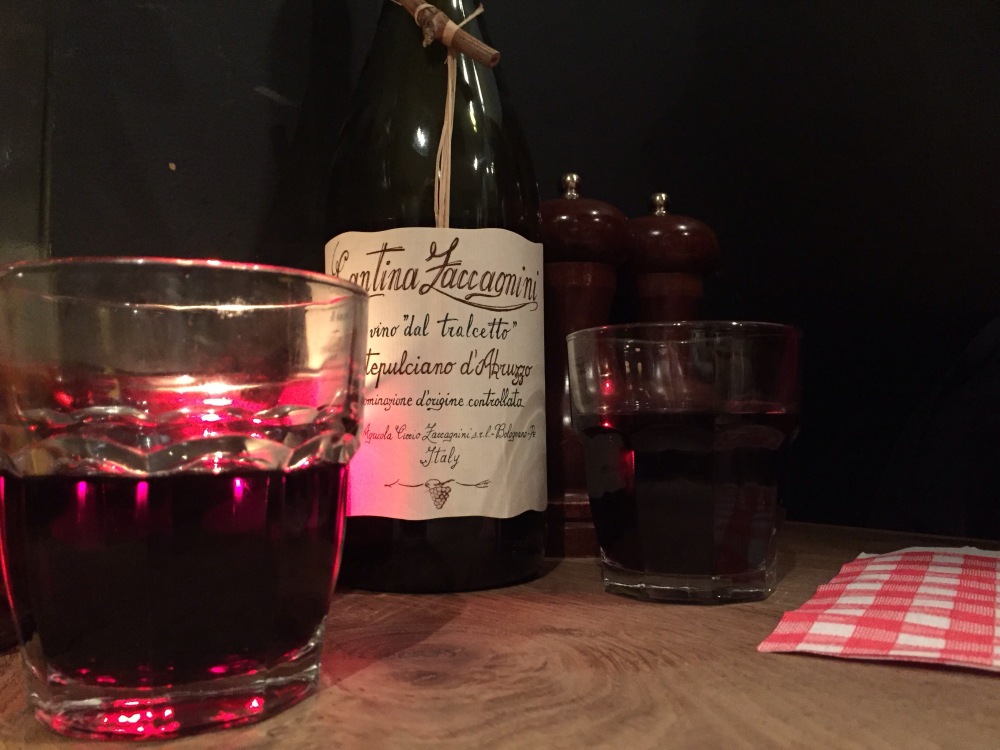 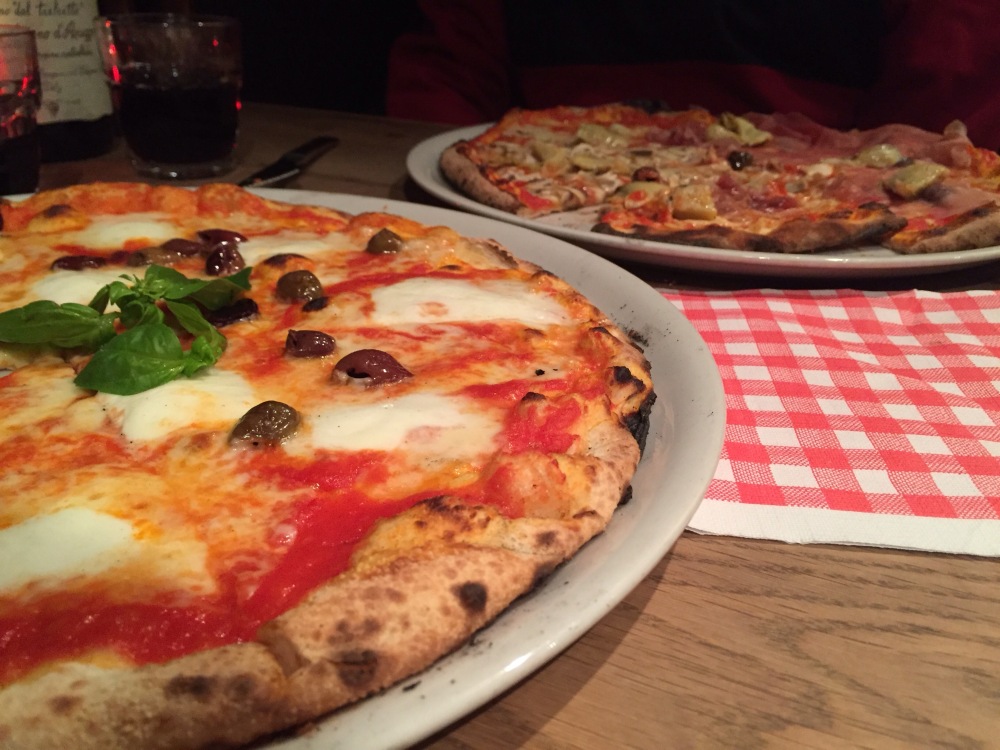 Amsterdam is littered with old-fashioned pub style drinking holes called bruine cafés, or brown cafés. They are warm, cosy, friendly and usually serve a great variety of beers. They’re not trendy places (nor are they trying to be) and the bar is as likely to be propped up by a small group of elderly gentlemen sharing a joke as it is by a younger couple playing checkers. A brown bar isn’t a place for drunken revelry but more for quiet enjoyment and if that’s what you’re after you are more than welcomed to join in. My favourite is Laurierboom in the Jordaan. We always try to drop in for a game of backgammon and a beer. 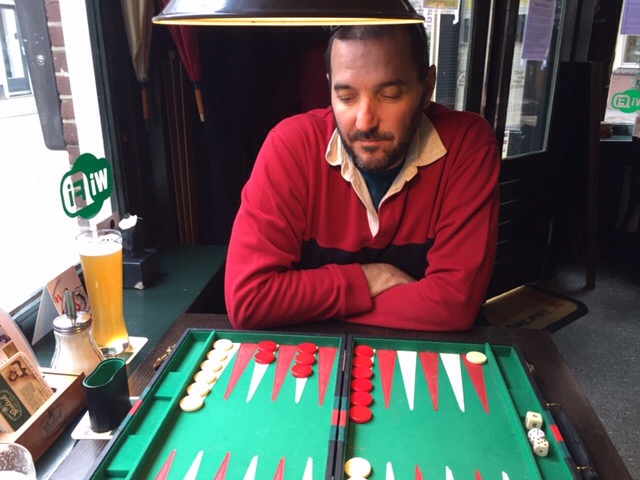 A very serious game of backgammon. 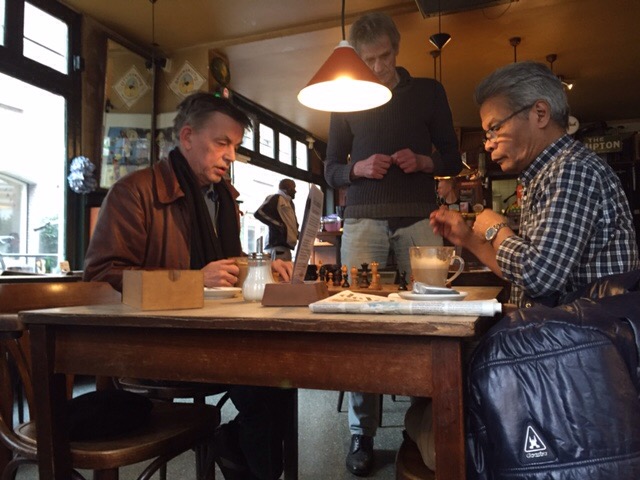 An even more serious game of chess.

* Drunk in this instance suggests to say joyfully inebriated. I don’t really advocate or enjoy the kind of drunk that is sometimes associated with Amsterdam.