My name is Chrysoula Stathopoulos. Since 1933, I’ve lived in Lechaion, a small seaside town in Greece. But I was born in a tiny village in the Peloponnese mountains in 1916. I am 101 years old.

My name is Chrysoula Stathopoulos. I’ve lived in Dubai since 2008. But I was born in Adelaide, Australia in 1971 and raised in Melbourne. I am 46 years old.

As the firstborn, I was named after my Dad’s mother, which is how the Greeks do. I hated my name growing up because nobody could ever pronounce it, and a lot of kids gave me shit for it. On the first day of Grade 2, my teacher actually accused me of making it up. I casually dropped the “oula” part of my name when I was 12, and made it official when I was 14. Over the years I’ve grown to love my full name again. It’s unique, and it’s who I am. It’s also something that connects me to my grandmother, my yiayia, whom I love dearly.

My twin sister Fotoula and I were the apples of our father’s eye. We had two older brothers, but we were the favourites and everyone knew it, including Mum. She scolded us once for making too much noise while we were playing and Dad looked at her very seriously and said, “Whatever you do, don’t ever talk to my girls like that again”. And she never did. Times were tough growing up because of the war, and we didn’t have a lot, but our house was filled with love and I always tried my best to make my Dad proud of me when he was home. He was gone for most of my childhood, working in America so that he could send money home for us. Every time he came home was a big deal and my favourite memory was of being bounced on his knees – me on one leg, and Fotoula on the other, the three of us laughing and laughing.

Even though Greek families usually covet a son, my parents had three daughters and I think that, secretly, my father loved being surrounded by women. My Dad drove trucks for a living in the early seventies, and he was gone for long stretches at a time. My earliest memory is of our flat in Elwood. I was wearing a nappy and crawling to the front door because Mum had told me that Dad was coming home. I remember bursting with joy when he appeared at the flyscreen door.

In 1924 my family moved down from the mountains so that we could attend school near Korinth. Some of the teachers were very strict, which I didn’t like very much. I certainly wasn’t used to being smacked, but the teachers had no problem hitting us if they got mad. I always studied hard, and tried to be the best student so that they would never have any reason to hit me. On 22nd April 1928 a big earthquake shook Korinth. Twenty people died, and nearly 15,000 people were left homeless. Even though our home was damaged, we were lucky that it wasn’t one of the 3000 that were destroyed, and that we still had somewhere to live. Our school had turned to rubble and, while it was being rebuilt, classes were held outside, on the football field.

Fotoula hated school. She would say, “Chrysoula, I’ve been to school for a week, now it’s your turn”. School wasn’t compulsory back then, so she could get away with it but it’s a shame that she never learned to read or write. I wanted to be a teacher or a mid-wife when I grew up because they earned 500 drachmas (about €2) a month, which was a lot of money for a woman back then. But I was forced to drop out of school in 1929, at age 13.

When we were young,my parents forced me and my sisters to go to Greek school on Saturday mornings. I hated it and faced each weekend with sickening dread. But my parents wanted us to learn how to speak Greek, and to appreciate Greek history and customs. Fair enough, but the teachers at the school we attended were sadistic fucks and what I remember most about those classes was the constant fear. It ended when a teacher pinched my cheek so hard he left a large purple bruise across my face. My crime? Not completing my homework. My parents, horrified that the tales of assault and battery were actually true, allowed me to drop out of Greek school at age 12.

In 1930 my beloved father got sick with double pneumonia. The closest doctor was in Didima, a village 100km away, and every time he came to the house it cost us 500 drachmas. When Dad died, we owed the doctor a small fortune and since we didn’t have the money, it was negotiated that I would go with him back to Didima and work as his housekeeper until the bill was paid. I didn’t want to go, but my older brother got very angry and slapped me across the face and told me I was going and that was the end of it. After that I was happy to leave, just to get away from him. My Dad would never have allowed anyone to strike me like that. But now he was gone, and I had no choice but to enter into servitude for nearly three years in a village where I didn’t know anyone and where they didn’t even speak Greek. During my time in Didima, I slowly learned some Albanian so that I could communicate with people, but I was happy when the debt was finally paid off, and I could return to my family, who had moved to Lechaion.

In late 2002 my beloved father was diagnosed with lung cancer. My parents tried to be upbeat and hopeful about the prognosis but as you can imagine, it was a total shock for all of us. My father was the healthiest and most robust man I’d ever known. He was invincible to me, a rock. In denial, I didn’t even believe that he was actually sick until he started showing symptoms a couple of months later. And after that, the decline in his health was rapid. Lung cancer is a truly horrible disease and over a ten month period I watched my father deteriorate from a tower of strength into an emaciated skeleton coughing up tar-black mucus onto my birthday cake, a month before he died. Shit like that stays with you, man. When we told yiayia that her firstborn had passed away, she cried. But because of the Alzheimer’s she sometimes forgets. Sometimes she doesn’t even remember who he was.

In 1933 I started working in the fields with my sister, picking fruit to support our family. We earned just 25 drachmas a day, which wasn’t much, but our lack of education didn’t leave us many options. A lot of people were in the same boat and there was a great deal of competition for these field jobs, so we weren’t always gainfully employed. In 1936 I met a man at work called Panagiotis, who was a real go-getter. He would schmooze around the taverns at night, networking for jobs, and his circle of friends always had paid work, thanks to him. He seemed like a nice guy, and he must have taken a liking to me because he started getting regular work for me too. Working side by side we started developing feelings for each other, and after a year we were engaged. We couldn’t afford to get married right away but I did move in with him which was illegal back then, so we pretended that I was his housekeeper and everyone fell for it! Haha! Suckers! We lived in sin for two years before we got married on New Year’s Eve, 1939. Ten months later we had our first child, Konstantinos, and then after that I gave birth every two years, with Roula, Chris, Toula, Sofia and our baby Stavros. 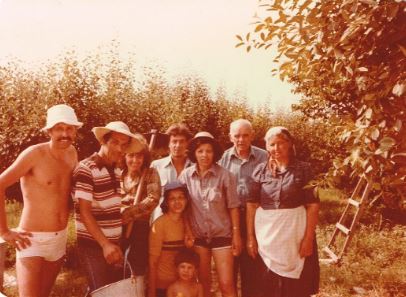 In the fields.  Kon, Chris, Toula, Sofia, Stavros, Roula, Panagiotis and Chrysoula.  And a small kid.

I met my husband David at work in 2005. It was love at first sight, for me anyway. We worked together for a year, exchanging flirty glances across the tower console before we actually started going out. Two days later I moved in, and four months after that we were married. Most people at work thought it wouldn’t last but, after eleven years together, we’re still nuts about each other. We decided not to have children, which we sometimes lament, but usually not.

Over the years all my children except Stavros emigrated to Australia. Roula went first because she hated working in the fields and wanted a chance to start a new life. Kon joined her a year later, and then the others followed. I wanted them to be happy and to have a better life than I did so I didn’t mind them leaving, but my god I missed them so much. My children are my life and they have always made me so happy and so proud, even now. In 1976 I went to Australia for a visit and I had such a wonderful time, mostly because I got to see all my children and grandchildren. Little Chrysoula was, of course, my favourite*. She was such a delightful child, and she taught me how to count to ten in English, and even though my memory isn’t what it used to be, I’ve never forgotten: onetwothreefourfivesixseveneightnineten! See!! I do have trouble remembering some things, but those old days are crystal clear. I loved Australia so much I went back for another visit in 1988 and I wish I could go again, but, even though I’m as fit as a fiddle, let’s face it, at my age it’s probably not going to happen. There is always someone here, one of my kids, looking after me, and I appreciate that. But I wish my grandchildren would visit more often.

I met my yiayia for the first time when I was five years old. She came to visit us from Greece and stayed with us for a few months. It was nice having her around because she was always smiling and laughing and hugging us and telling stories and crocheting beautiful things. Her skin was wrinkly, but soft, like well-worn leather. And you could tell that my Dad just LOVED having her around. They glowed around each other, overflowing with mutual adoration and respect. My grandmother was such a loving person and she taught my Dad to be honest and hard-working and to be proud of his achievements. In turn, he taught me the same.

I’ve been thinking about my yiayia a lot lately. I am writing this ejo to celebrate her, while she’s still alive. I don’t know if I will ever see her again. But I want to. The last time was five years ago. She recognised me, which was wonderful, but she is very locked up in her mind most of the time. Locked in the past. And the people around her, even loved ones, are very much in the periphery of her consciousness. But every time we are together, even though my Greek is shit and she can’t speak English, there is always a deep and loving connection between us. A circle of life and love that cannot be broken by distance or years apart.

We are Chrysoula Stathopoulos. 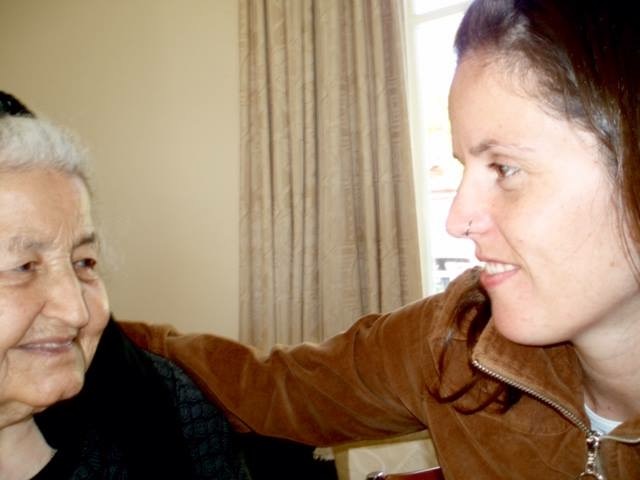 * Some creative license MAY have been used in the writing of this ejo.