Most of my readers will already have some idea of what Ramadan is (they’d better – I write about it often enough!!!).  For those who don’t know, Ramadan is the most important month of the Islamic lunar year – a thirty day period of spiritual growth and introspection, during which Muslims abstain from eating, drinking, smoking and having sex during the hours of daylight in order to commune with their god. One of the traditions of Ramadan is, of course, the celebrated breaking of the fast – and in Dubai this tends to be a pretty lavish affair. Five star hotel restaurants put on huge spreads every single night, tables groaning under the weight of platters of Arabic and international cuisine. It’s truly a sight to behold. Though not necessarily a good sight. At least not if you are aware of the monstrous amount of food that is wasted each and every day during Ramadan.

Apparently, in the UAE, about 500 tonnes of uneaten Iftar food gets thrown into landfill during Ramadan. That doesn’t even come close to the 400 tonnes a day wasted in neighbouring Bahrain during the holy month, but it’s still a shitload of food that gets chucked away. Which is a disgrace when there are half a million impoverished labourers in Dubai. A lot of these workers are Muslim, which means that during this year’s Ramadan they are going without food and water for fourteen hours a day, while toiling in the harsh sun.  These are the guys that should be enjoying five star buffets laden with extravagant food every night.  But they’re not.  They’re breaking their fast with whatever scraps they can afford – which is not much.  It’s enough to make you want to organise a food handout!!

Indeed it is!  So, on Friday 24th May, just before sunset, David and I joined our wonderful friend Roshni and her amazing team of volunteers at a labour camp in Sharjah to help distribute hot Iftar meals to some of these men.  Remarkably, we were able to give out 1000 meal packages consisting of dates (traditionally eaten to break the fast), water (to quench the thirst of many hours of dehydration), a delicious and nutritious chicken biryani (packed full of flavour, energy and protein), and a piece of fruit for a simple dessert.  Nothing fancy but definitely fancier than nothing.

As always I have taken lots of photos of the guys as they receive their dinner package.  The reason I do this is because sadly, the labourers of the UAE are an often unacknowledged demographic. I want to humanise them, because despite being treated like slaves, they are real people, like you and me. I want to show their dignity and uniqueness.  I want you to look into their eyes and recognise that they may have dreams and hopes and aspirations.  That they may experience irritation and depression. Joy and laughter and gratitude. That being poor in worldly possessions doesn’t make their lives any less valuable.  I hope that by looking at these pictures you can find just one face that you can connect with – because ultimately we’re all the same.  Some people are just luckier than others. 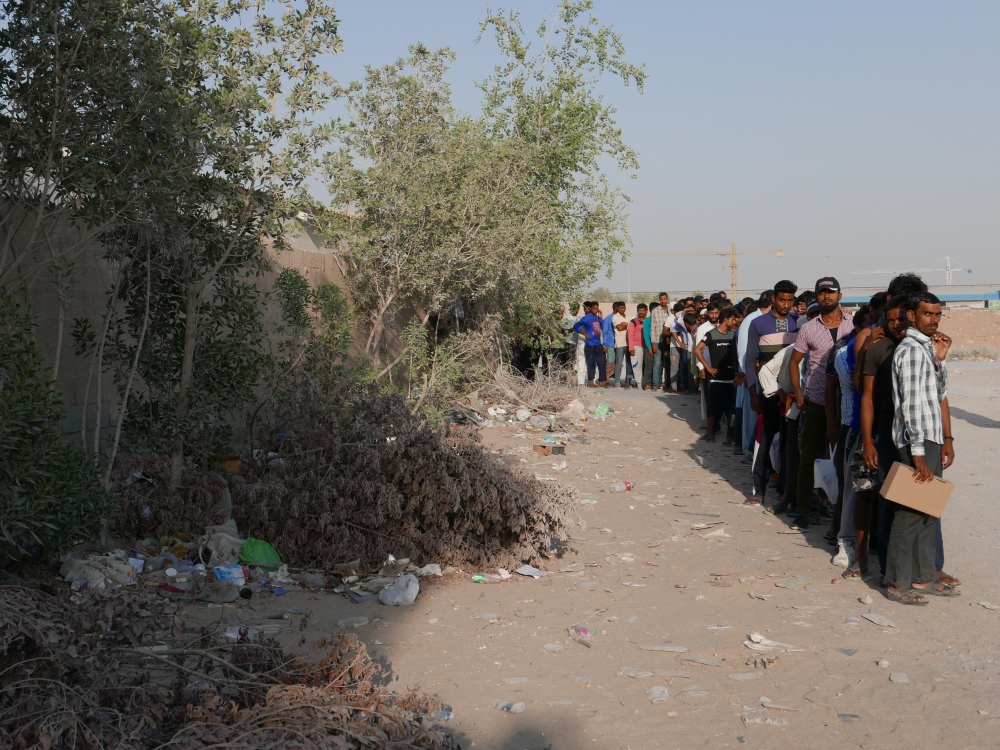 The men lined up in an orderly fashion.  Unruliness was dealt with firmly. 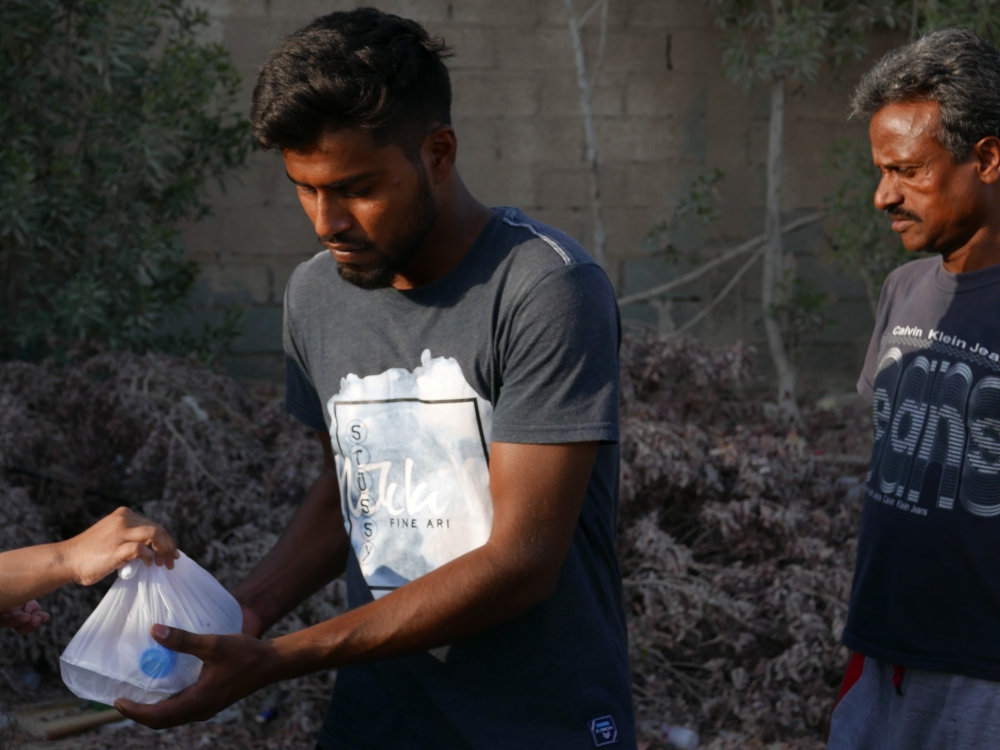 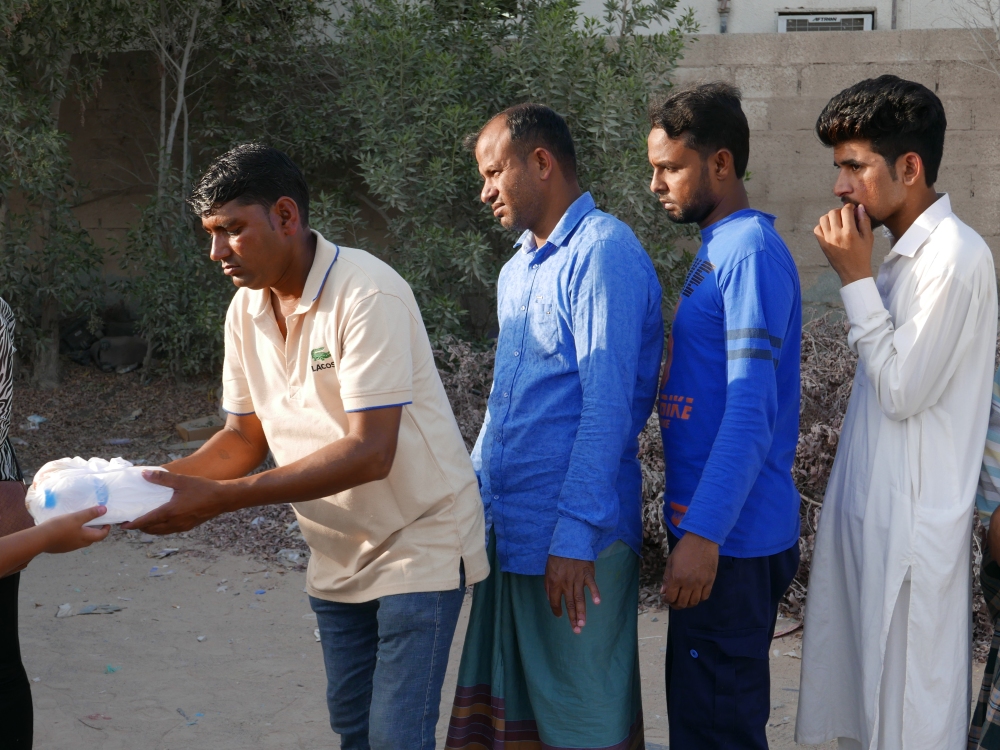 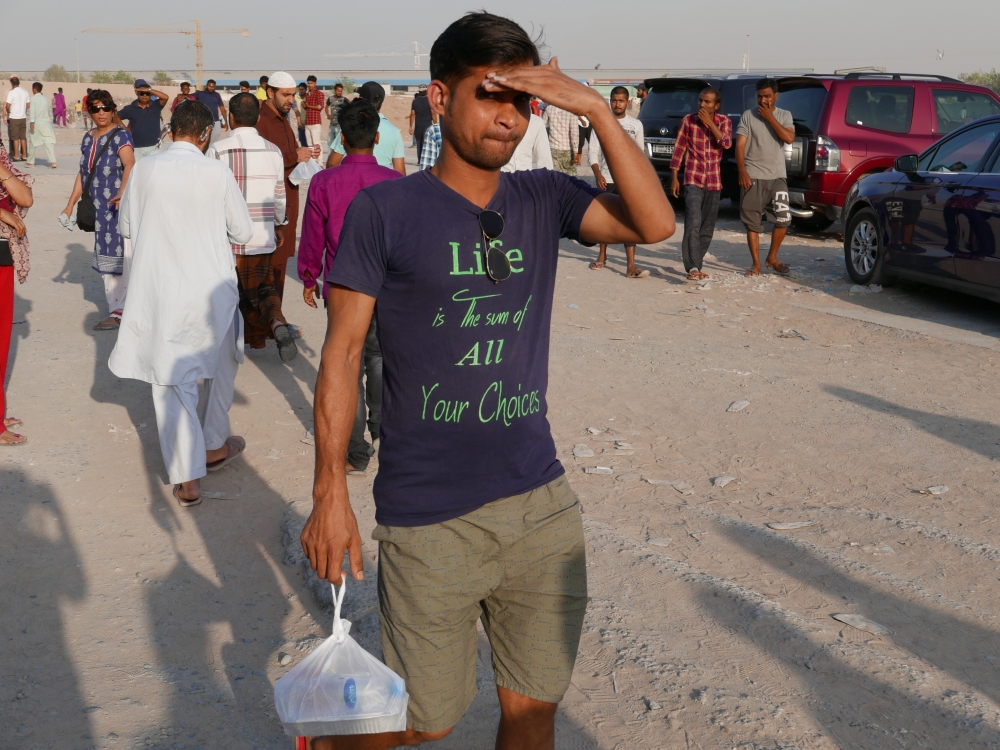 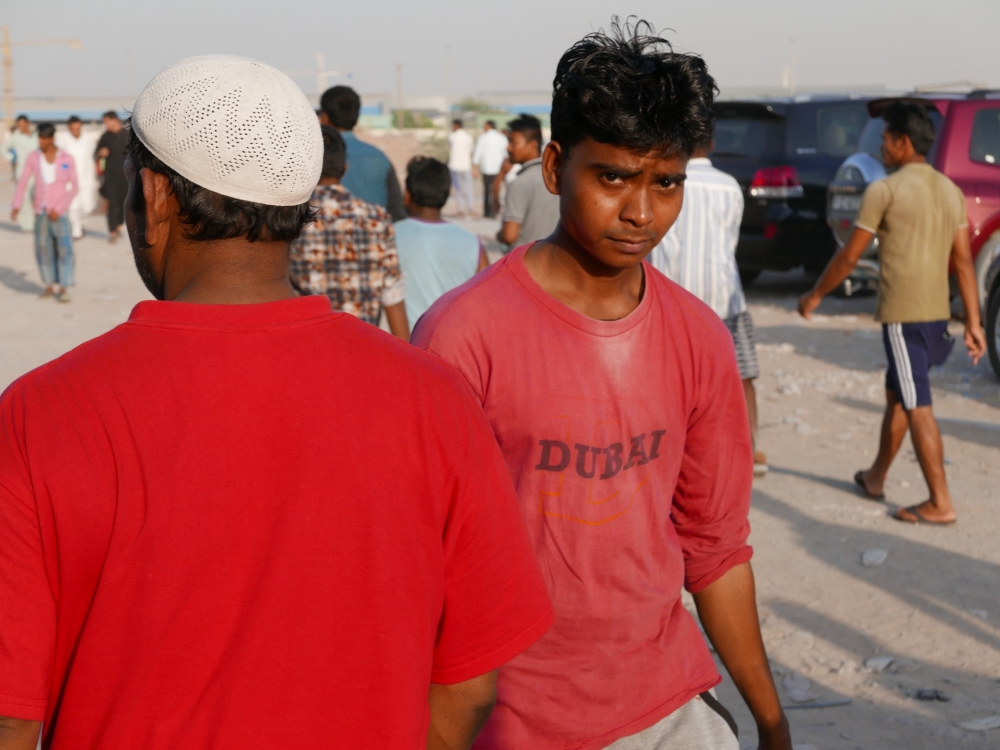 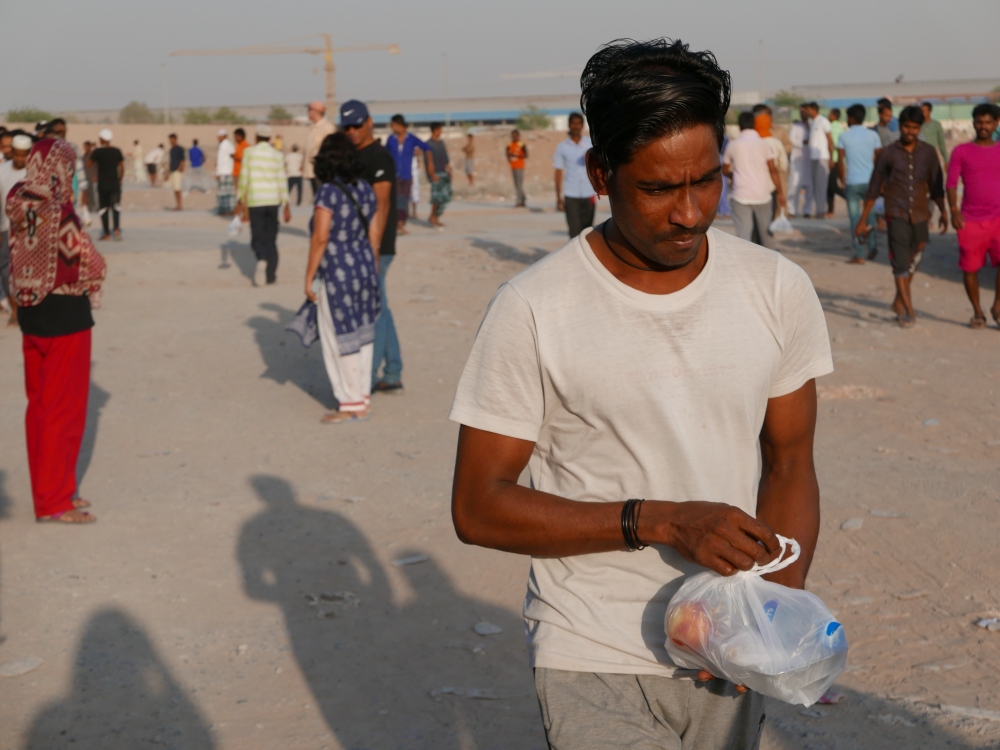 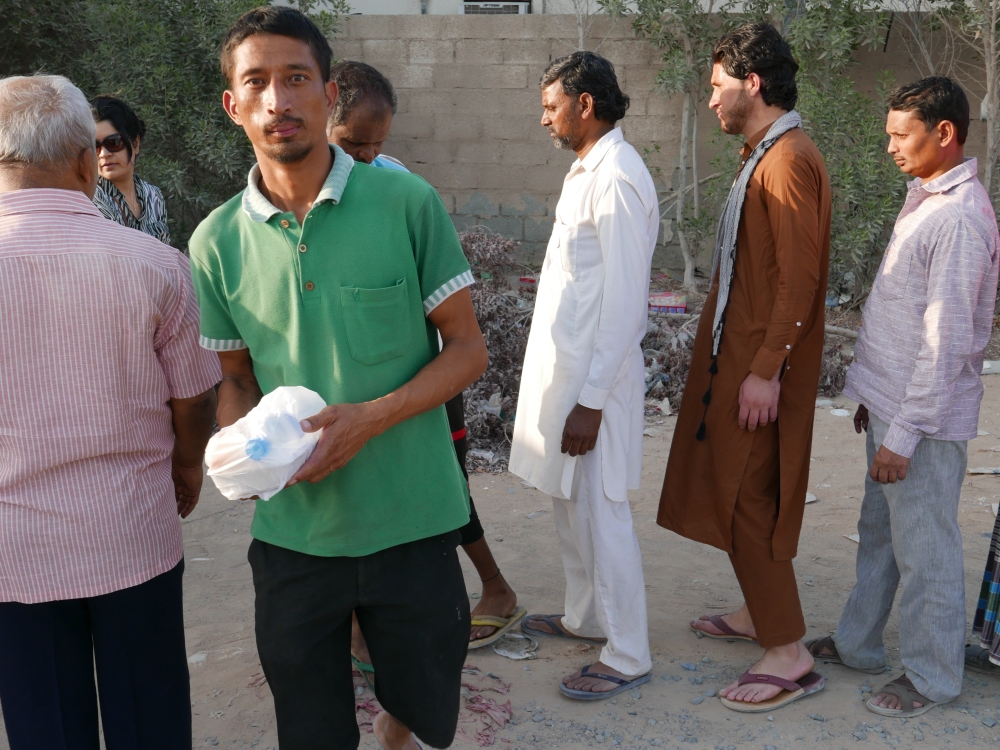 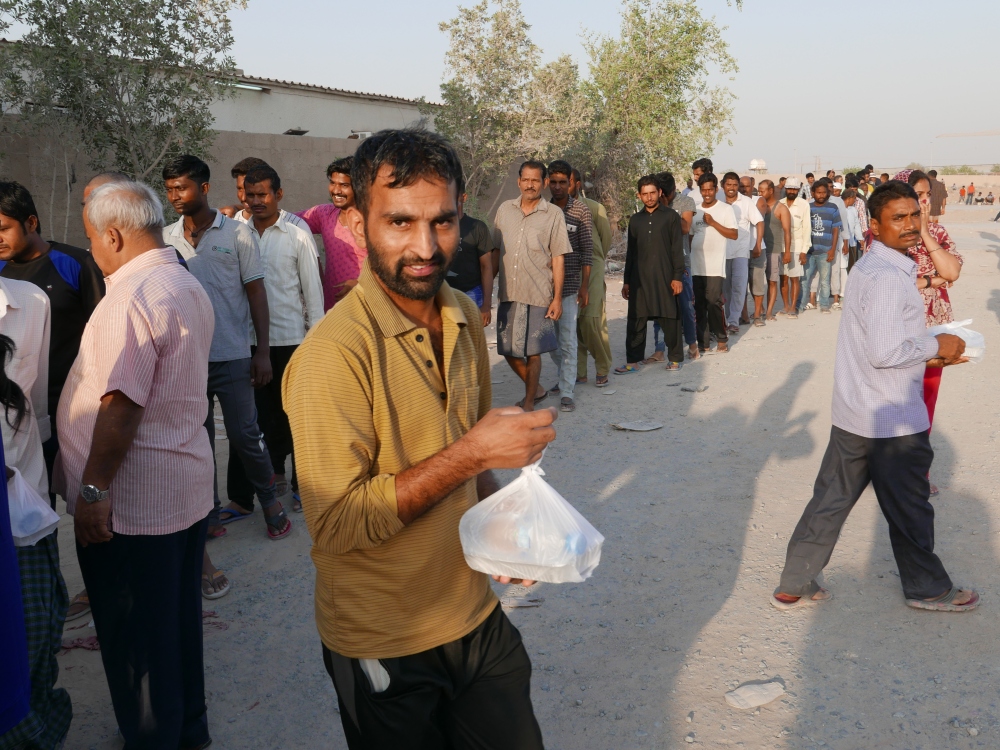 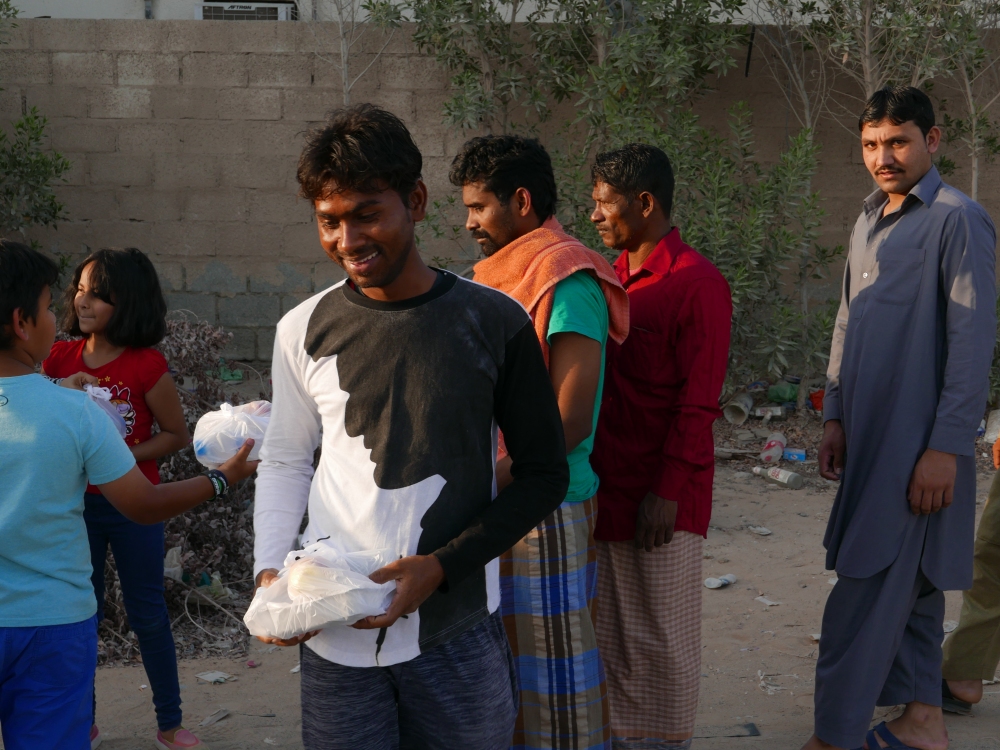 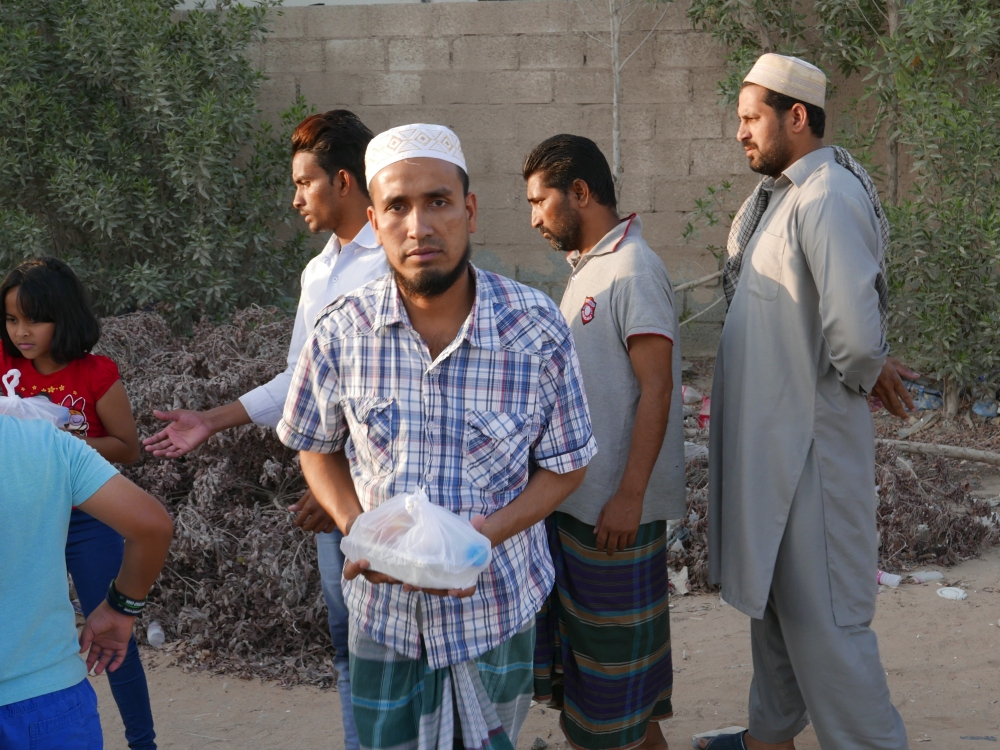 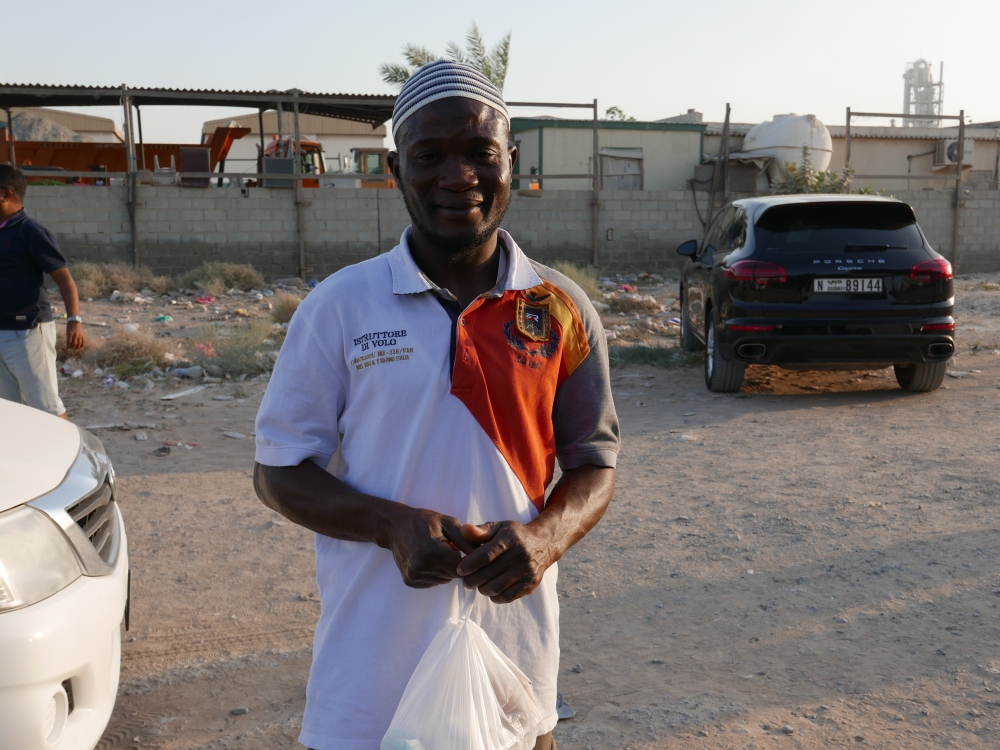 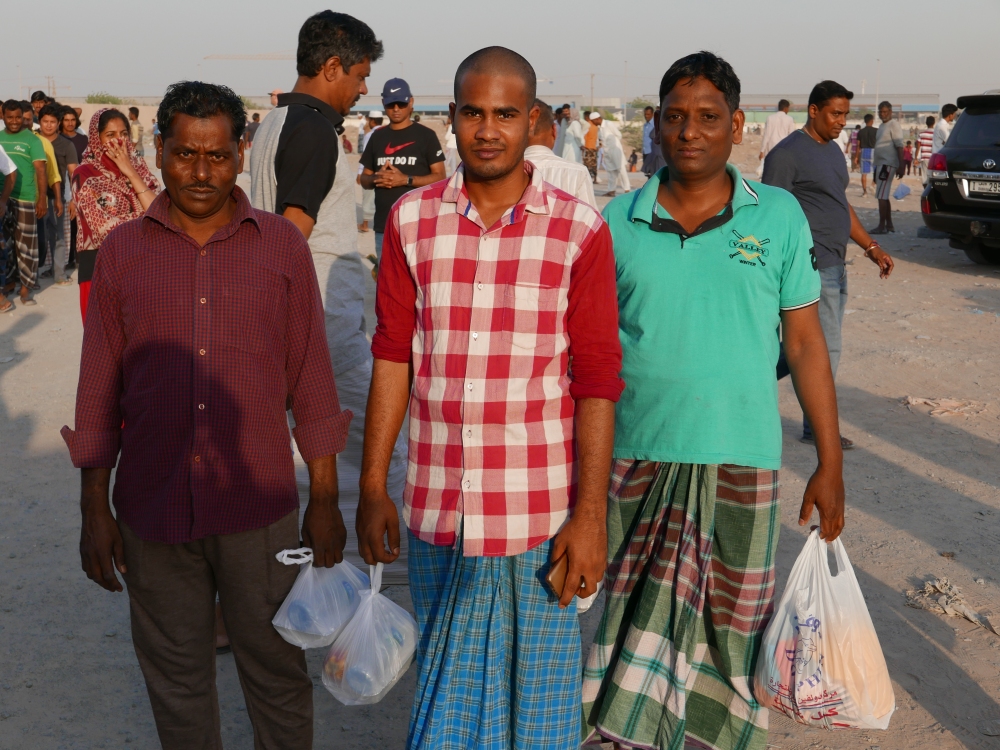 I’d like to say a very special thank you to everyone who contributed to this year’s Ramadan handout.  You are wonderful.