There have been no ejo’s for a while because David and I have been travelling a bit.  First a wonderful 2 week holiday in Turkey and just recently a four day break in Thailand – it’s a very tough life!!  Anyway, this ejo is about our vacation in Turkey as it was so full of fun times.  I had never before contemplated Turkey as a holiday destination.  If I think hard about why that is, I would probably decide that it was because the Turks had occupied my parent’s motherland for hundreds of years causing famine, poverty and suffering to my ancestors.  I’m so petty, aren’t I??  But I sat down and decided that the best way to avenge my forefathers (and foremothers, foreaunts, forecousins, etc) would be to go to Turkey and enjoy the hell out of it.  After all, they do say that the best revenge is living well.  So off we went to live well in Turkey for two weeks.

I found it to be a great place to visit, with really nice people and phenomenal food.  My Mum might get mad at me for saying this but we consistently ate the best food I’ve ever eaten and as a result it’s now my favourite cuisine in the world.  Super light pastries filled with an assortment of flavours – cheese, vegetables, mincemeat, cured meats, seafood.  Mmmmmmm.  Really fresh dips and the most incredible, freshly baked flatbreads and pides.  Then, there are the kebabs.  Oh my god, we had kofte kebabs (seasoned mince meat shaped into a sausage and skewered), lamb, chicken, beef.  All tender, juicy pieces of meat chargrilled to a carnivore’s idea of heaven.  And even better than the meat was the amazingly fresh seafood.  Calamari so tender it literally melted away as you ate it – barely any chewing required.  Fresh, salty sardines marinated in a variety of different sauces.  And the most amazing fish I have ever eaten.  No wonder our belts had to be let out a few notches on our return flight home.  And I haven’t even mentioned (yet) the baclava and Turkish Delight.  I’m Greek, so I grew up around baclava.  But I’ve never seen a shop selling thirty different varieties.  I wanted to lock the place up and just roll around in the stuff.  I’m not going to get sucked into comparing Greek baclava with Turkish though – as far as I’m concerned, all baclava is good baclava.  And the Turkish Delight was, wait for it, delightful.  The lightest, gooiest, yummiest, most beautifully flavoured I’ve ever had the pleasure of stuffing into my face.

So, in order to stop myself salivating, I’ll stop with the food and get on with the trip.  We started off with three days in Istanbul.  Now Istanbul (no Constantinople, no Istanbul) is quite a large city with a population of about 18 million.  That’s a bit less than the entire population of Australia jammed into a city the size of Sydney.  So, there are lots of people.  The city is split into two by the Bosphorous Strait, a body of water that connects Europe to Asia, and as a result is very busy.  At any one time there are hundreds of ships and carriers navigating through it – it’s quite a sight.  Another sight is the multitude of people line fishing over the two bridges connecting the north and south sides of the city.  Personally, I wouldn’t like to eat a fish caught in water which is infested with oil tankers and garbage barges, but that’s just me.  Actually, on further contemplation, I probably did eat just such a fish.  And it was delicious!!

We spent those three days in Sultanahmet (southern side), also considered Old Town.  Now coming from Dubai, a city whose “Old Town” is still under construction it was actually a real delight to wander the narrow, cobbled streets that were literally rather old.  Very old.  David and I tend to not do much sightseeing when travelling.  In my opinion, the best way to absorb a city’s culture is to eat and drink it.  But we were staying in a gorgeous little hotel right across the street from the Blue Mosque which is a major Istanbul attraction.  So we did the quick tour, marvelled at the astonishing architecture, marvelled even more at how they’ve ruined it with a zillion steel wires dangling from the gorgeous mosaic ceiling for the lighting system, and then went and had a couple of cold beers to quench the thirst we’d built up from all the marvelling. 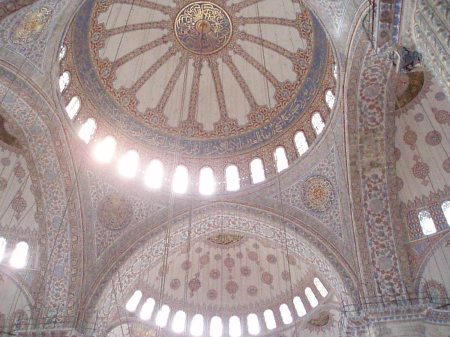 Soon enought it was time to catch our flight to Antalya, on the Mediterranean Coast, where we were to pick up a rental car and drive the three hours to Kalkan, a quaint little village on what is known as the Turquoise Coast (no points for guessing why).  We picked up the car and soon after we had started driving, we realised that we didn’t have a map.  Or any idea which direction Kalkan was in.  No-one we asked for directions could speak English and we couldn’t buy a map anywhere, so we did the only thing we could do.  We texted my sister in Australia and got her to look on Google Maps (thanks Pieta, you’re a champion!!).  So we eventually made our way towards Kalkan and everything was smooth sailing from there on, right?  Oh, so very wrong!!

I was in desperate need to go to the toilet so we pulled into a busy service station.  David parked the car while I went in search of the amenities.  As I walked into the shop, I heard behind me that familiar, sickening crunch of metal that happens when two vehicles get too close for comfort.  I also heard everyone in the shop gasp with alarm.  Now, before I even turned around to look, I knew, I just KNEW that it was our 1 hour old rental that was involved.  And yes, when I did turn around, there was our little Hyundai Accent’s bonnet rather squashed by a huge tour bus that had backed into it.  Now that’s bad enough.  What elevated the incident to comical (though not at the time) was that the Turkish bus driver spoke not a word of English.  And neither did the busload of Russian tourists.  Nor for that matter did anyone who worked at the service station, or anyone who was a customer there.  No-one.  At all.  Hahaha!!  So we had to fill out the accident report form (which was entirely in Turkish).  Somehow (I have no idea how) we managed to fill in the details, call the rental company who sent someone to tell us there were no more cars left but they were happy for us to continue with the bonnet dented, and eventually (after three hours and one hell of a sunburn from lots of standing around in the sun getting it sorted out) get back on the road.

After our car survived being eaten by a bus, we weren’t going to let anything ruin our holiday, and Kalkan was just the salve we needed.  In fact the week we spent there was so lovely and relaxing, I’m going to skip right over it.  I will put up some photos though, of the view from our villa, the boat we chartered to sail us around the islands one day and the delicious meal they provided for us. 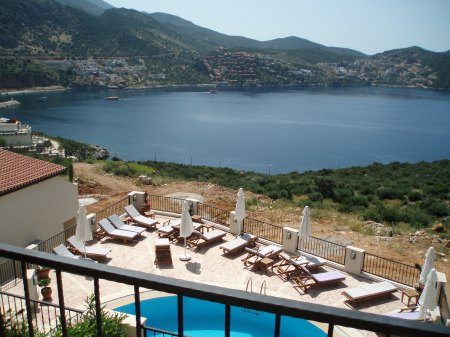 View from our Villa in Kalkan 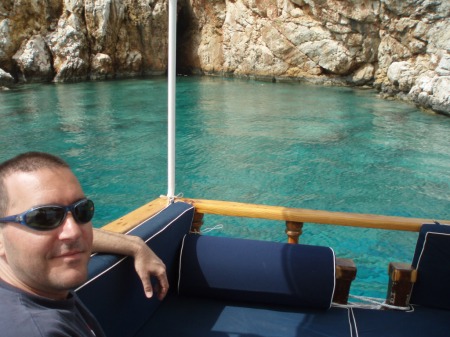 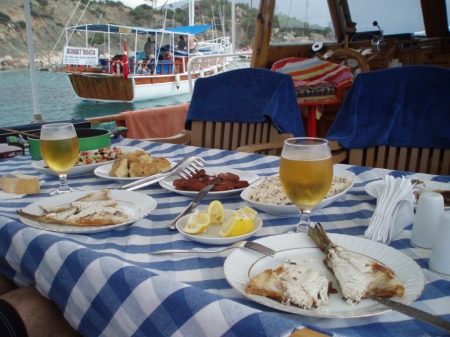