Those of you who know me well know that I don’t like to stay in hotels when we travel. I couldn’t think of anything worse than being in some amazing city in the world (Prague, Amsterdam, Singapore, Sydney, Los Angeles, Paris) and staying in a room which tells me nothing of that city. Yes, the five star experience has its place, offering comfort, familiarity and certain expected amenities. But frankly, I’d rather miss out on all of those things in favour of a room with character, personality and charm. A place that smells, looks and feels unique to that town, city or country. And you really can’t get that in a Hilton.

For the last couple of years David and I have been using the services of a great website called http://www.airbnb.com – a clever concept in which you can rent a couch, a room or an entire house in the city you wish to visit. We’ve stayed in some awesome places in San Francisco, Amsterdam, New York City, Barcelona, Munich, Berlin and Madrid. And I’m sure we’ll stay in some more in the future.

But you know what I’ve found? I’ve found that the quality and variety of apartments is only really great in the big cities. As soon as you start looking further afield, the number (and desirability) of the available apartments tends to plummet. I’ve spent hours scouring Airbnb for apartments in Ibiza, Kalkan, Palm Springs, Poros, Napa Valley, Asolo (and many more) to no avail.

So, if you are visiting these smaller destinations and you can’t find an apartment to rent, and you wouldn’t be seen dead in a Mövenpick, what options are available to you?? I’m happy that you asked. We have, in our travels, occasionally stayed at bed and breakfasts, guesthouses, small hotels and inns. Naturally the quality varies (somewhere between horrible and sublime). After all, you are staying in close quarters with people that you have never met before and who may be boring, stupid, smelly or just plain annoying. And, who knows, they might think the same of you. It’s a crap shoot – which is why I spend so much time researching. I want to lower the odds in our favour.

I have written reviews of both of them on Tripadvisor (El Folló and Domaine de la Paix). I don’t usually write reviews of places that are already wildly popular and well-known. They don’t need my help. I tend to only write reviews of the small slices of paradise that we’ve lucked upon. The reason being that they do need my help. If someone reads my glowing review and decides to stay, then, well, it’s good for business. It’s the least I can do in return for great memories. In fact, El Folló wasn’t even registered on Tripadvisor before we stayed there. As a favour to Mercé, I contacted them and requested that they add the guesthouse as a “Specialty Lodging”. Which they did.

So, let me tell you about it. We arrived at El Folló on an evening during which they happened to be serving an amazing banquet. Aren’t we lucky! We stuffed our faces with leg of venison served with fig and red onion compote, octopus stew, organic roast chicken and rabbit, baked monkfish, two types of regional soup (one pasta consommé style and a thicker leek-like creamy style with mussels and romesco), salads, roast potatoes and a brown rice pilaf. After this savoury cornucopia we were offered six different types of dessert (including semolina pudding, quince custard tart, banana cake, berry muffins and chocolate cake). Later on we waddled upstairs and slept very well indeed. The next night was a slightly more subdued affair, though we ate just as heartily. We also managed to score a free cooking lesson from Mercé (she normally charges for her talents), helping her with the calçots. Check out the photos.

Beautiful old farmhouse in the hills just outside of Barcelona. 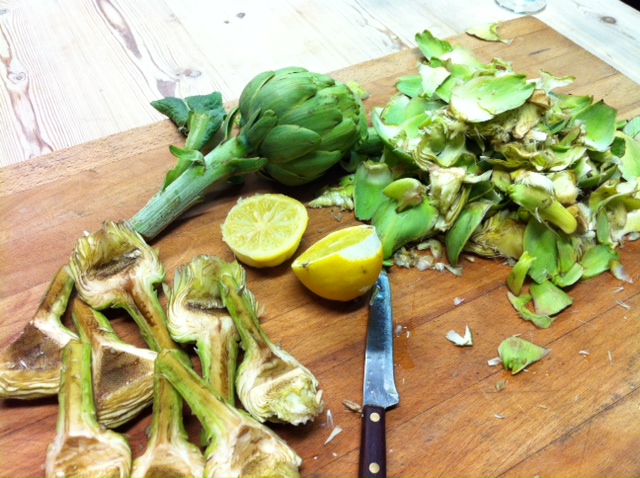 Mercè taught me how to peel and cook artichokes. 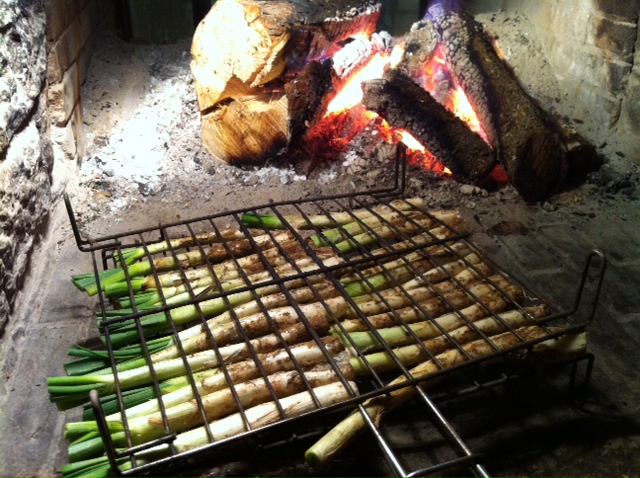 Cooking calçots on the open fire. Calçots are a mild green onion grown in Catalonia, Spain. 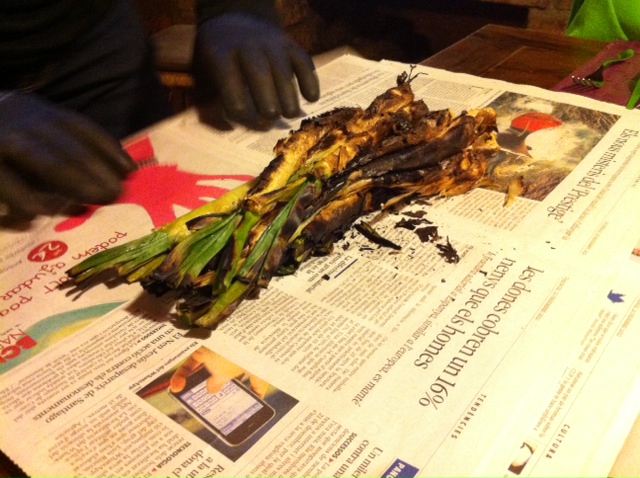 After the calçots are cooked the are wrapped in newspaper to “sweat” for a bit. Note the heavy duty gloves. These babies are HOT! 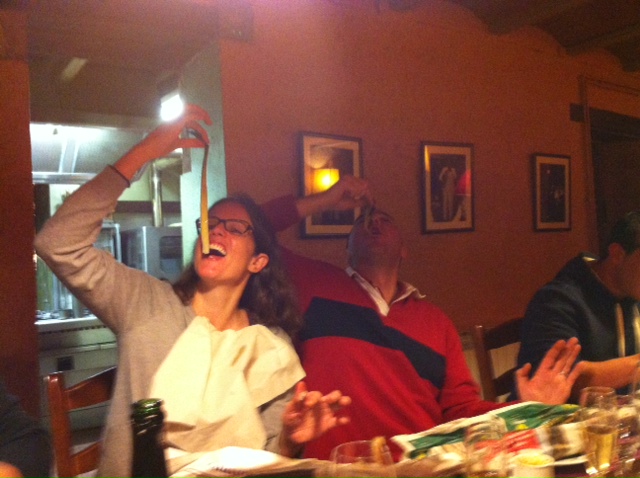 So, you pull out the tender, cooked centre of the calçot from the charred, burnt skin, dip it in Romesco sauce and buen provecho!! 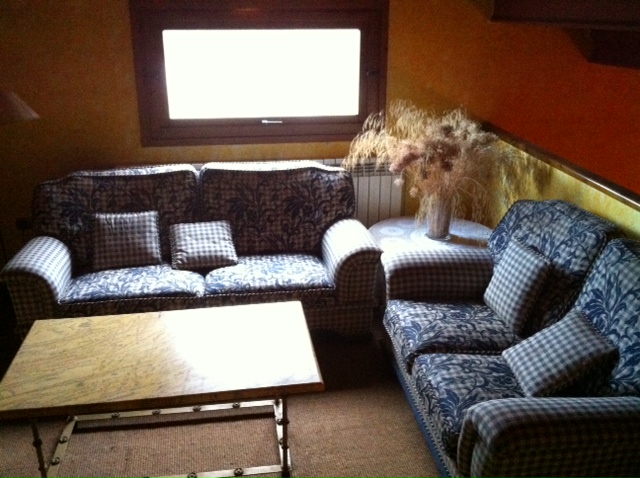 Not the fanciest sitting room in the world – but it could possibly have been one of the cosiest on this chilly winter’s day.

A bedroom at El Folló. Cosy, rustic and very comfortable.

At Domaine de la Paix, there were no cooking lessons. But there were pre-dinner drinks mixed by Pascal, who easily makes the best ti-punch on the whole island. We weren’t required to have dinner at the house every night – we just wanted to. The food was so amazing that we spent five out of five nights there. Sure we could have gone into town for dinner every evening, but when the cooking is that good at home, you’d be an idiot to go anywhere else. Plus, it meant we could drink as much of their wine as we liked without having to worry about drinking and driving. We’re smart like that. So, to serve as an explanation as to how we each gained 3kgs in 5 days, not only did we enjoy Pascal’s home-made bread, brioche, yoghurt and chocolate crème for breakfast every morning (accompanied by Claudine’s delicious jams and marmalades – my favourite being ginger and melon, truly divine). But every night we ate at least three spectacular courses, washed down with free-flowing French and Chilean wines and finishing off with Claudine’s variously flavoured infused rums to help with our digestion. Whoa Mama! All for the ridiculous price of €25 a head. We almost felt like we were stealing from them. On our last night, we were actually treated to a dinner of three lobster courses, out-of-this-world chocolate cake and fresh papaya. C’est très très bon! J’insiste! (We even got a few French lessons each evening, don’t you know!) Have a look.

Classic french table settings for our lobster banquet. We ate outside on one of the few nights in wasn’t raining. It was just lovely.

The incredibly rich, gooey, intense chocolate mud cake. It was literally oozing on the plate. YUM! 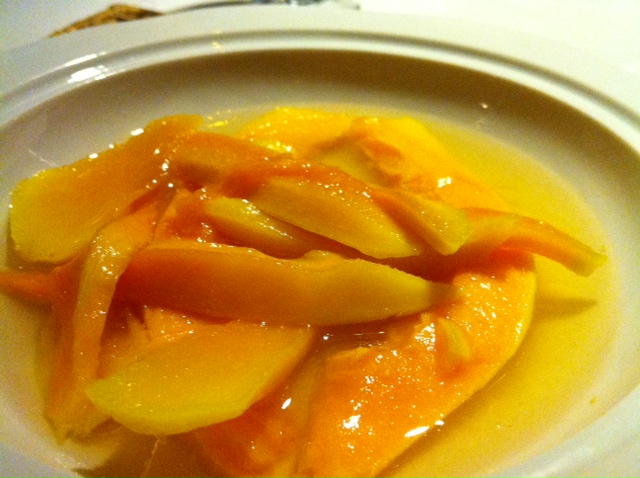 And after we’d already eaten four courses I honestly couldn’t even finish this lovely, fresh, light fresh papaya in syrup dessert. I just couldn’t. Shame on me!

The wonderful magnesium pool. As I’d sustained a pretty bad sunburn in Mauritius the week before we only went swimming when it was raining (sunsmart, you see)!! I’m pretty sure everyone thought we were mad. The magnesium made our skin soft and velvety – and actually helped with the sunburn too!

As a little side note, on our last day on the island we had a drink at a place called Le Marlin Bleu, run by one of Pascal’s friends, an awesome guy called Méga. He was warm, funny, entertaining and not too shabby in the looks department either. When my Birkenstock broke he took it, disappeared for five minutes and then returned it to me, patched up with a shiny brass screw. This gesture just blew my mind and warmed my frozen black heart to its very cockles. It encapsulated the hospitality, generosity, warmth and kindess that we experienced on Rodrigues.

So, spending hours trawling the internet hoping to come across one of these gems is certainly not everyone’s cup of tea (though man, I would do it all day long if I could figure out a way to get paid for it). But that’s why I’m writing this ejo for you, so that you don’t have to. If you happen to ever find yourself in Tagamanent (a 40 minute drive from Barcelona) or in Rodrigues (a 90 minute flight from Mauritius) then do yourself a favour and seek these guesthouses out.

You can thank me later.